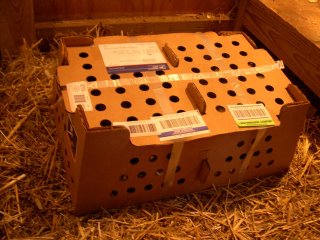 This morning I got the call as I was heading to the barn to milk the cow. My peeps had arrived at the local post office on the morning truck.

The 22 turkey poults and 8 goslings made the trip from the hatchery well and are settling in nicely. The turkeys are Kardosh Bronzes, a strain of standard bronze turkeys. Kardosh Bronzes are large turkeys, not as large as the broad-breasted types grown commercially for supermarket sales, but a lot sturdier. These will able to reproduce naturally. (Commercial broad-breasted types must be artificially inseminated because selective breeding for the ‘optimum’ breast has created birds that aren’t capable of natural insemination.) The Kardosh Bronzes have longer legs and a sturdy, proportionate bone structure. The color is similar to that of wild turkeys, beautiful, with a metallic glimmer to the feathers when the light strikes them at the proper angle. A few years ago, I had the opportunity to talk with Frank Reese Jr., a long-time breeder of Kardosh Bronzes and friend of Norm Kardosh, who developed the strain. One of Frank’s huge young toms followed us through the poultry yards, puffing and displaying. The late morning light reflecting off his feathers reminded me of the sheen of a new penny.

The goslings are American Buffs, a breed listed as critically rare by the American Livestock Breeds Conservancy. Buffs are generally calm and docile, I’m told. We’ll see. My previous experiences with geese could not be described in those terms. I’m willing to play nice if they will.