The three goslings escaped through the gap under the barn stall door.  That shouldn’t have been a surprise.  They are, essentially, toddlers.  I’ve yet to meet a toddler that doesn’t delight in slipping free of the grownups, giggling and racing away as fast as their little legs will carry them.  Why should goslings be any different? 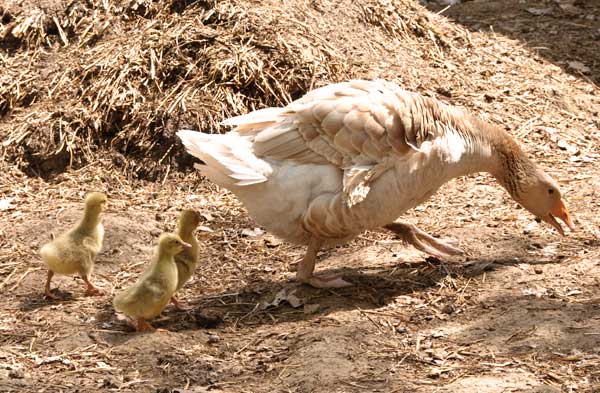 The frantic honking of their parents alerted us, and we hurried outside.  Already, one of the flock who’d remained free had found the little ones and was escorting them back uphill to the barn — slowly.  He took his time, wandered a bit, checked out this, nibbled on that, and didn’t appear a bit concerned even though the honking had reached a crescendo.  We call this young adult goose ‘Wings’.  We’re guessing he’s a gander, but we could be wrong.  One of them is a gander, and for various reasons we think this one is the most likely suspect.

Wings cooed softly to the goslings as they walked.  He might have been encouraging them, or he might have been telling them how much trouble they were in.  Or maybe he told them scary tales about creatures that lie in wait for foolish fuzzy goslings who go wandering without permission.  Whatever he said, the goslings must have taken him seriously for they toddled along obediently behind him. 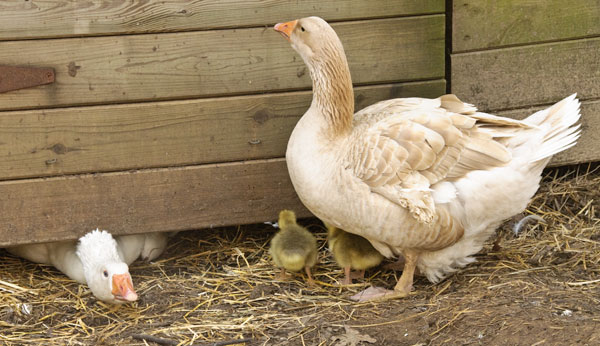 Whitey poked her head out when the little ones reached the barn.  Actually, she tried to shove her entire body under the stall door, but that didn’t work out so well. 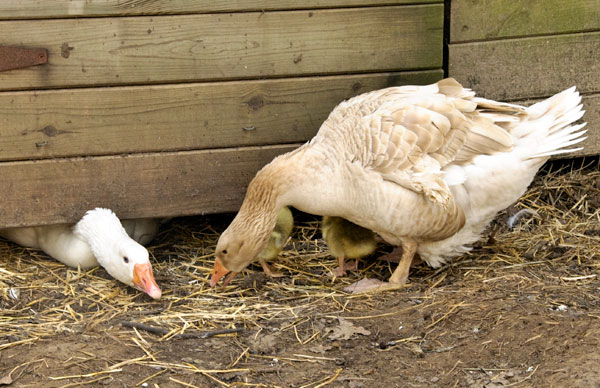 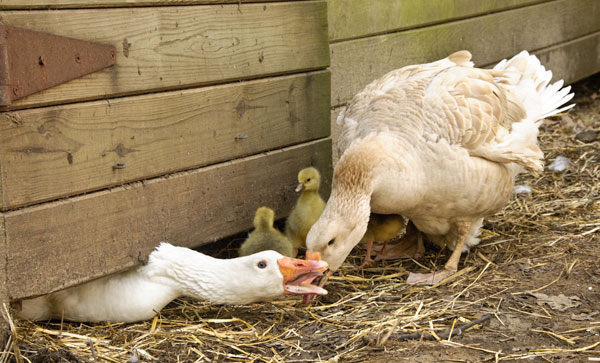 They threatened me with screeching and loud hisses when I approached.  And the goslings just stood around, waiting to see what would happen.   Nothing happened except the grown geese got more frantic, and I was afraid someone would get hurt if they tried to fly out —  these birds can flap their way off the ground for a couple seconds, but they’re not built for flight.  They’d get hurt — I’d get hurt if they slammed into me by accident or on purpose.  So instead, I set the camera aside and helped my daughter capture Wings and the goslings.  We deposited everyone inside with the rest of the flock. 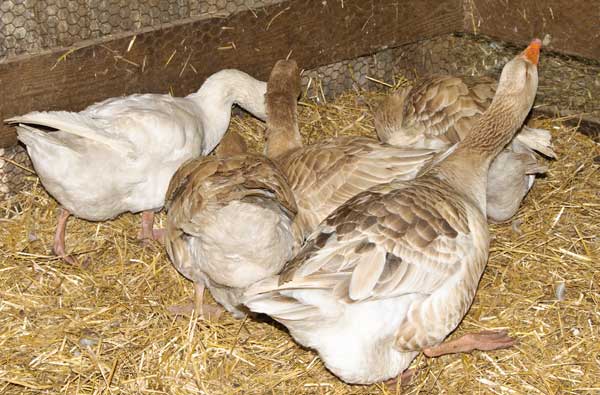 There was much rejoicing as the flock nudged the goslings into a corner and surrounded them.  The noise was deafening, but happy, and the goslings were hidden from view somewhere in the fluffy feathers of one of the five geese that settled into the straw.

And they all lived happily ever after.  For now.