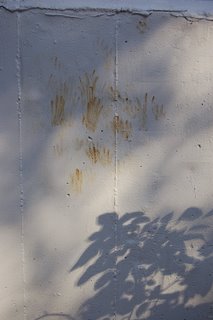 I grew up reading tales of pioneers, trappers, and Indians (we weren’t into the whole politically correct terminology thing back then). I loved tales of woodsmen who could track game — and people — by the evidence left on the trail. Broken twigs, a few turned leaves, and of course, footprints. I studied animal footprints I found in the woods and compared them to drawings in the books I checked out from the library. But of course, those were dry tales, just facts without the adventure and all the other interesting details that made those stories about wild places and those who dared travel there so fascinating to me.

So I never learned to track, and I’ve forgotten a lot of what I memorized from those books. Yet an awareness lingers. Now and then I see a set of tracks and wonder what passed there and what adventures are occuring.

These muddy prints appeared on the newly painted foundation by the chimney after a rainy night. There’s a small, brick shelf there where the cats like to nap in the sunshine. The rosebush casting the shadow in the morning light had a broken stem and a few bruised leaves. A struggle? A stray cat, fleeing the farmcollies? Or just a misgauged leap by one of the housecats who’s put on an extra pound or two?

The Other Side of the Sunset