I really had intended to sell the entire litter of pups.  I’d have kept every one of them if I listened to my heart instead of my head.  But that would be way more dogs than any farm needs.  Besides, they were great pups who each deserved their own farms and families to take care of when they grew up.  Still . . . when the transportation arrangements for Freckles fell through, and Freckles’ buyer had to cancel the sale, I wasn’t heartbroken.  I could have sold him a few times after that, but I stalled for one reason, then another.  There were a few weeks there that I might have let him go if I’d found the right buyer with the right sized farm, the right livestock for Freckles to work with, and a personality that complemented Freckles’ own.  Eventually, though, the truth became obvious.  It was undeniable.  I just wanted to keep him.

I felt guilty about that for a few more weeks and did try to keep an open mind.  Finally, though, we gave in to the inevitable.  Freckles was here to stay.  He’s ours, and he’s the goofy, yet mostly competent pup we really didn’t need but are glad to have anyway.

Freckles has always shown great potential as a hearding dog.  When he was 8 weeks old, he and a littermate ‘helped’ me bring an old goat who’d indulged on too many wild rose blossoms into the barn where I could examine her and treat her for the case of bloat she’d given herself.  While I was checking old Katrinka over, the pups disappeared.  A few minutes later, they herded the two other retired nannies into the stall.  Then they went out for the Babydoll Southdown ewe and brought her up, too.  I was impressed with their independent thinking skills, even though I also knew I’d better keep an eye on them and make sure they didn’t take it upon themselves to move the stock here and there and harass them for the fun of it.

Freckles still does a great job of helping with the livestock, mostly with the other dogs but occasionally on his own if I need the assistance and the older dogs are occupied elsewhere.  Like any young dog, sometimes he gets it all right and makes me so proud I’m grinning like a fool.  Other times, he gets it wrong and sends the cattle off in the wrong direction, and we have to start all over again.  Still, for a five-month-old pup, he’s not half bad.  That’s what my neighbor said last week when Freckles and Dinah, his dam, helped us separate my cattle from the stubborn yearling steer that had escaped the neighbor’s pasture.

Pest control is what Freckles currently does best.  He’s been hunting mice, voles, rats, and moles with his mama since he was small, and now he hunts independently throughout the day.  Here he is in action, at the edge of the tall grass near the big garden. 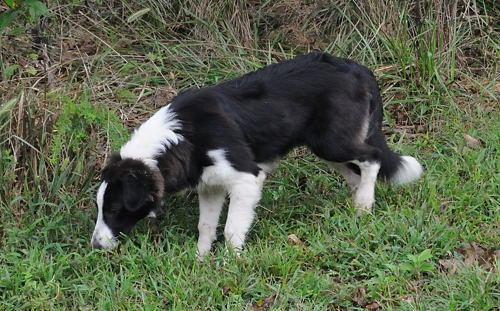 He knows there’s something small and furry around there but he’s still searching, cautiously walking along, nose down, nostrils quivering as he focuses on finding the critter’s trail. 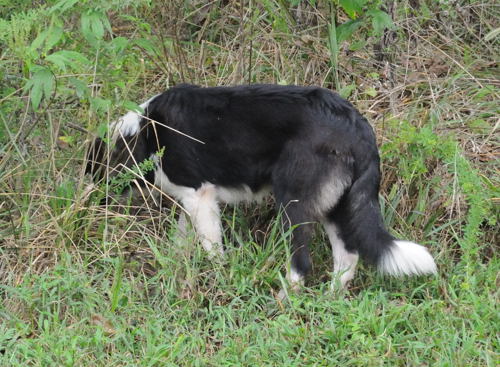 He always checks the tall grass and weeds.  There a lot of places for a mouse to hide in there. 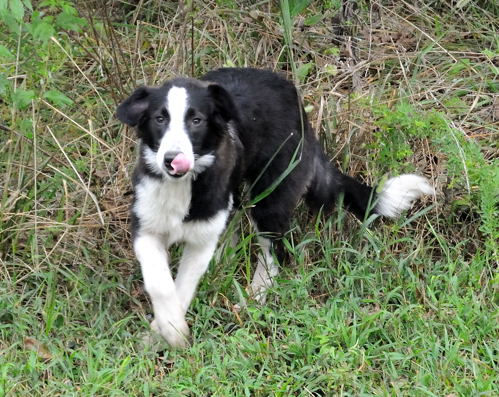 Nope, no fresh trails in those weeds, but somethign around here smells yummy. 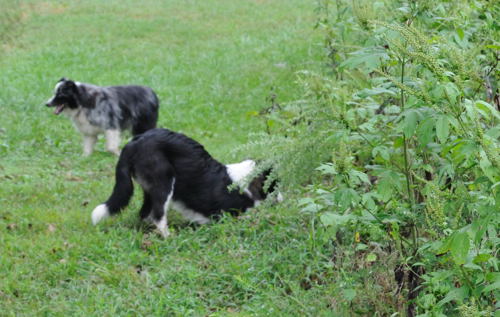 Aha!  Behold!  A scent trail leading into the tall grass and . . . a mole tunnel. 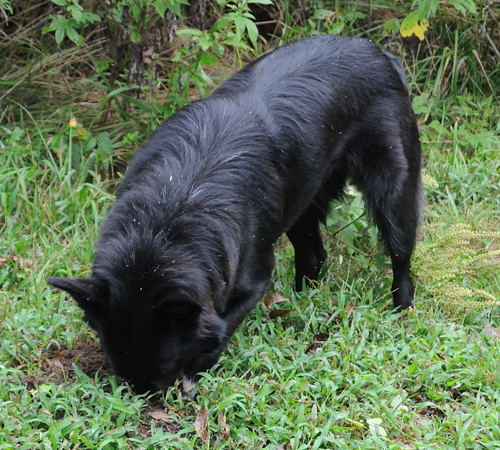 Mama Dinah found the other end of the tunnel and stuck her snout right into the dirt, snuffling hard, checking for a current occupant.  After a bit, she gave up and moved back into the weeds, out of sight, where she made more snuffling noises for a while. 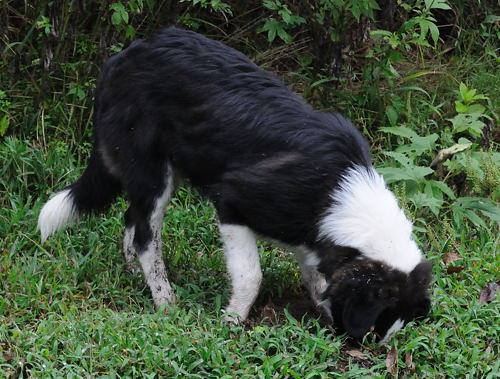 Freckles checked the hole his mama abandoned, just in case.  He’s still young enough to have to try everything himself first before he agrees that Mom was right.  The mole might be down there, nearby, but they wren’t at the right access point to catch it. 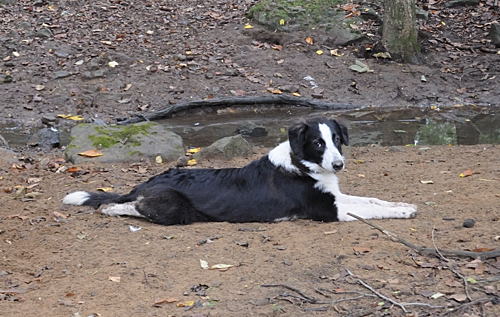 Mole hunting is tough work.  After a while, a pup works up a sweat and needs to rest a while, to stretch out and cool off in the damp sand near the little spring-fed creek.

On this particular day, it began to rain.  That was fun, too, for a while, running around in the wet grass, crashing through the woods and wrestling in the underbrush.  Then it was time for a nap.  So Freckles trotted into the greenhouse where I was working because he also likes a good scratch behind the ears before settling down for a nap.  He plopped down in the middle of a pile of tarps and row covers I’d set aside while clearing out the section to be planted next. 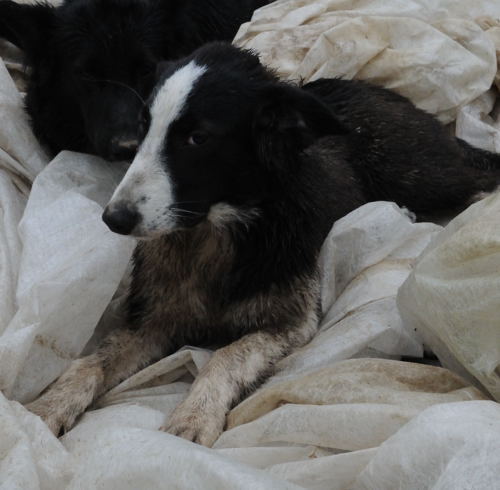 You can tell by his expression that he’s realized his error.  That was not a puppy bed. 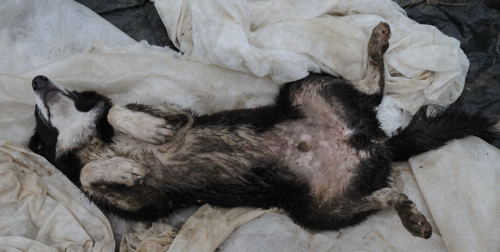 Rather than moving, he tried to play cute and con me into rubbing his belly.  Seriously, look at that sand and mud caked into his fur.  Would you rub that belly?