I knew that Rosie was about to deliver and had been checking on her at all hours for several days.  Besides that, she was huge.  Seriously, look at this picture (below), taken in the back pasture on a rainy day last week. 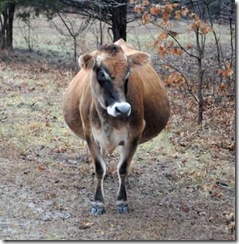 For comparison’s sake, here’s a shot taken a few minutes later with the other cattle.  The horned black heifer next to Rosie is her last calf, now 16 months old.  The bigger black steer is a month older.  Rosie = WIDE.  The other two = normal. 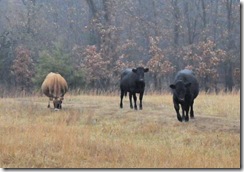 Early this week, Rosie exhibited symptoms that she was quite close to giving birth — we’ll just skip over the details involving certain bodily fluids and big cow boobs.  I wanted her to calve in the safety of the barnyard and not in a thorn thicket on the back 40 where the coyotes hang out, howl at the moon, and plan their meals.  So I locked her into the big stall in the barn, gave her a thick bed of straw, plenty of water and sweet prairie hay, and twice daily treats.

Then I waited.  And scooped out dirty straw and poo with the pitchfork.  And waited some more.  And cleaned up more poo.  I got up in the middle of the night to check her.  (And cleaned up more poo, ’cause Rosie’s very picky about that sort of thing.)  I was a bit bleary-eyed when the in-laws arrived first thing New Year’s morning, and I hadn’t made it back out to the barn yet.  Feeling guilty for my sloth, I stumbled out there.  Dinah, the black dog, let me know something had changed.  I heard her ‘look, look’ bark — and all you dog people know what I’m talking about.  I stumbled faster and spotted the calf.  Woo hoo!  At last!  My wait was over.  I mumbled something like ‘finally!’  The cow gave me a look.  I was tempted to apologize for acting like it was all about me, but hey, she’s a cow.  The look couldn’t mean anything, right?  I got her some grain and got busy checking her over and cleaning up the stall.  Then I saw the second calf, curled up in the far corner.

And I grinned like an idiot.  Twins!  And there I’d been, silly me, stumbling around, checking every little thing but missing that brown calf that had been dozing behind the cow.  She’s the calf in the foreground in the picture below – a sturdy little heifer.  She seems like the calm one of the pair. So far. The little bull calf is a bit smaller, a bit darker, and a lot friskier. 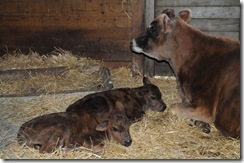 After that, everything went pretty well for the morning.  Everything got fed and watered.  I hugged the calves some more. They’re just so cute!  Plus, that early hugging is a good start for whatever training I’ll do with any I decide to keep.  (I’ll talk another time about that fine balance between familiarity and too much familiarity.)

Evening chores weren’t so easy.  I had sheep to move back into the barn — and for some reason I thought I could do it the same as every other day this week.   I’d just move the sheep from the south side barnyard, through Rosie’s big stall to the smaller stall on the north side of the barn.   So I fed Rosie at the milkstand.  While she was busy munching her goodies, I opened the outside gate, called the sheep and stood back.  It was all going well until the sheep saw the calves.  At that instant, I realized my big mistake.  I hadn’t counted on the freak-out factor.  Sheep freak out at every little thing, and that includes newborn calves they haven’t seen before.

They ran away.  They stared at me.  They stared at the barn.  They stared in horror at the calves that followed me out of the barn on wobbly legs.  Then the little bull calf stepped past me and moved closer.  And that was enough for the sheep.  They headed for the far corner.  I coaxed the calves back inside, called the dogs, and after a great deal of walking we managed to gather the sheep and move them into their stall stall via a different gate that was well away from those scary brown calves.

Phew!  Done!  Or not.  The calves were missing.  Mama Rosie was out of munchies and getting impatient, calling out to her wandering young, and the little brats weren’t answering.  I bribed Rosie with a little more grain and a big flake of hay, then headed back out to search.  I found the brats a couple hundred feet away at the north fenceline where they were getting to know the rest of our little herd. 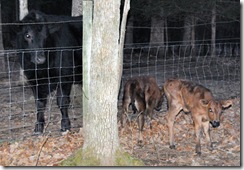 They didn’t want to go back either.  One of the farmcollies tricked the little heifer into following her back to the barn, but I finally had to just pick up the little bull calf and carry him in.  He got a lot heavier along the way, it seemed. 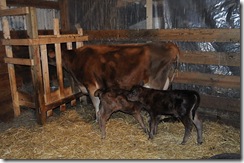 To his annoyance, we arrived back at the barn to find his sister had taken the prime nursing spot and was hogging all the good stuff.  I released Rosie from milking stand, and she moved to the center of the stall and let both calves nurse. For a minute. They fill up fast at this age and eat often. 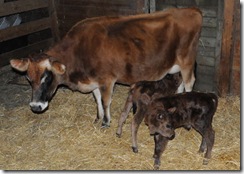 And so ended their first day.  I’m almost afraid to let them out tomorrow.