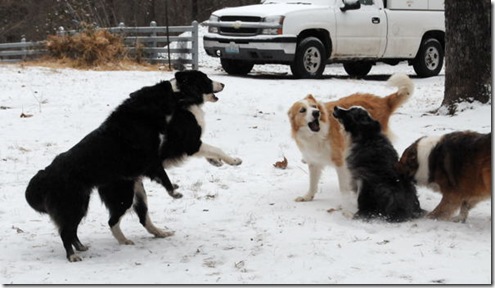 About those dogs . . . see the farmcollie on the far right sneaking in for a playful nip?  That’s Bebe.  She tugged hard on a tuft of old Blue’s fur.  Blue curled his teeth back in a snarl.  It’s a very careful snarl, not too much growl to it, not too much teeth, maybe a twinkle of mischief in those pale, near-sighted eyes.  The hair on his ruff stayed flat, and he didn’t budge from the obedient sit position he adopted a few minutes before.  Blue’s being especially careful with his snarls because Ralph, the alpha dog, is in his face.  Ralph & Blue fought long and hard several years ago over that alpha status.  Blue had it, lost it, and now does his best to walk that narrow pathway of due respect and dignity.  The three older dogs on the right eased into a good-natured game of feint, dodge, and chase.  The younger ones on the left are another story. 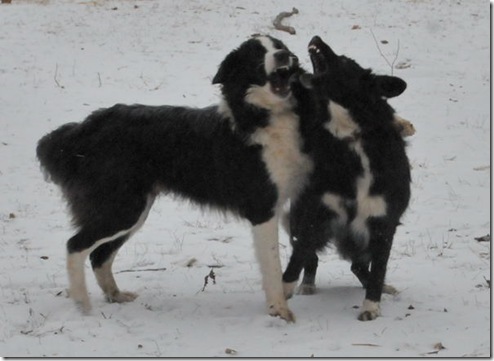 That’s Freckles on the left and Dinah, his mama, on the right.  Those two would play all day like this if I’d let them.  Well, maybe not all day.  They’d have to take time out to help move sheep and cattle, and to catch moles, voles, mice, and squirrels.  All that’s pretty much like play to them, though.  And when they’re not ‘working’ for me, they’re wrestling with each other. 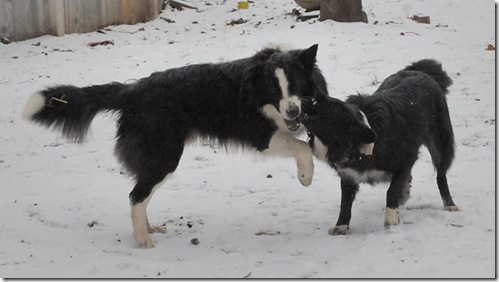 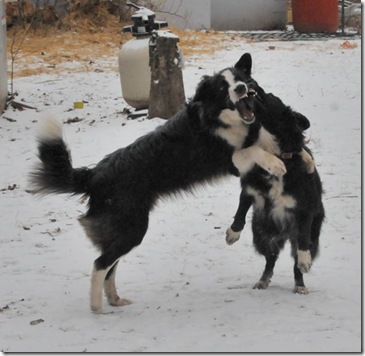 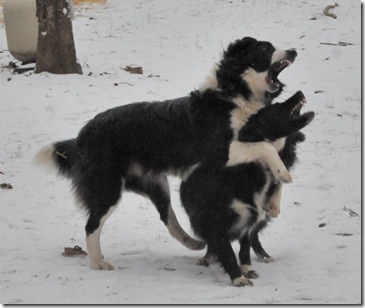 And it goes on and on, both of them growling, snarling, twisting, and darting in to nip ear and throat. 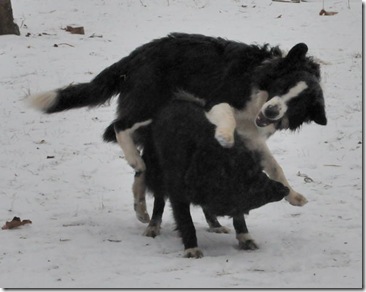 They don’t break the skin.  Mostly they slobber all over each other and look vicious. 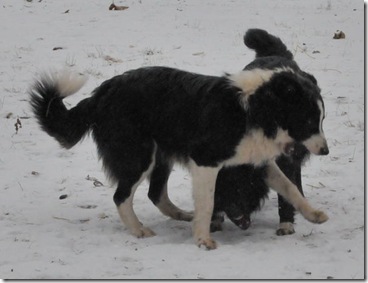 There’s Dinah, coming in low in an attempt to flip Freckles over so she can force him into submission. 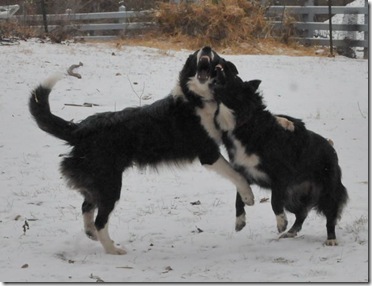 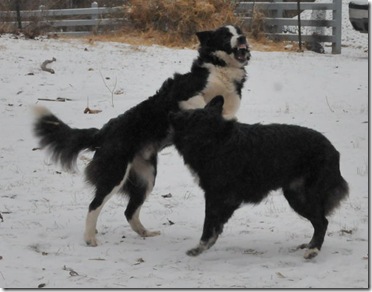 He’s a dog of the world now, a full 9 months of age.  He’s past the worst of the awkward ‘teenage’ growth and looks more like a mature dog.  He’s still at the bottom of the status ladder here, which is what happens when you still live at home with all the adults that raised you still bossing you around.  Dinah’s not quite two years old yet, so she’s not quite the mature, grown lady either.  Two is about the age I start expecting farmcollies to act like mature, capable helpers.  Dinah’s almost there, and in fact she’s a better worker than any of my other farmcollies were at that age.  There’s still enough playful immaturity in her, though, that I don’t leave her and Freckles loose together without adequate supervision.  They’re like smart, naughty children.  What one doesn’t think of, the other does, and the two of them can get into four times as much trouble together as they can alone.