Even the chickens huddle up close to the fireplace when the temperature drops and the snow flies. 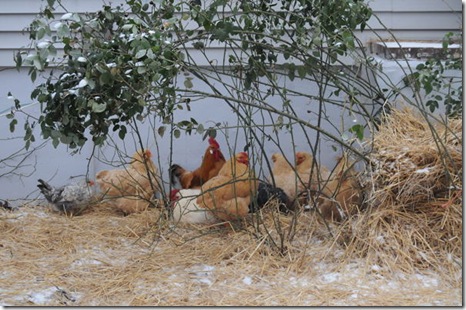 Really, there’s a fireplace in this picture with the chickens — the back of one, at least.    The wide base of the chimney is the barely visible section of concrete wall jutting out behind the pile of straw on the right.  The gang of boss chickens like to huddle up against the exterior wall closest to the chimney.  There’s always a deep bed of straw mulch there at the base of the rose bushes, which is nice for keeping the snow off the toes and fluffy chicken bottom feathers.   Once the boss chickens are in place, they stay there all day.  They won’t cross the snow, not even for corn, until dusk falls and it’s time to head for the safety of the night pen. 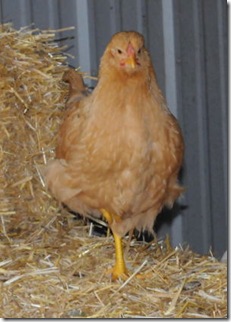 This Buff Wyandotte pullet seems particularly snow averse.  She will NOT venture out of the barn into the white stuff, not for corn, not even to hide from the pesky bachelor roosters.  Instead, she perches high on a stack of straw bales, one cold leg exposed to the air, and one tucked up in her feathers for warmth.  I don’t suppose she feels safe enough from the bachelors to settle down for a nap and tuck both feet comfortably beneath her.  This way, she’s ready to flee on foot or wing at any given moment. 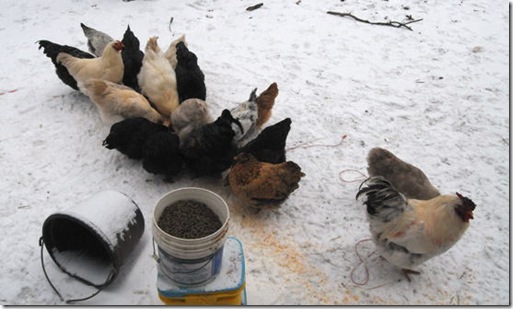 The ‘teenage’ band of mixed Wyandottes don’t care so much about the snow.  Not much gets between these birds and a good snack.  They’re up at dawn to forage, and all 15 run to the barn at top speed when they hear me begin the morning chores.  I have to spread cracked corn on the ground away from my pathways to keep them from getting underfoot. 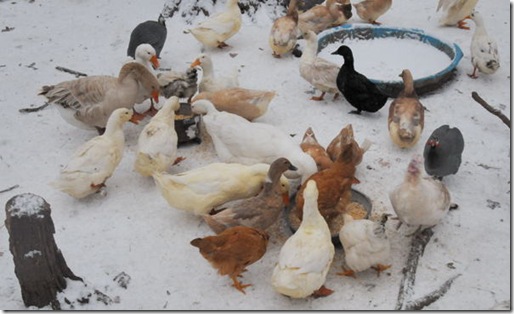 The ducks are worse than the teenage birds.  They actually like snow.  They play in it all day — half the night, too, judging from the noise they make.  They have easy access to a stall spread with a thick layer of fresh straw, but they’ll sleep in the snow on all but the most frigid nights.  When they sleep, that is. 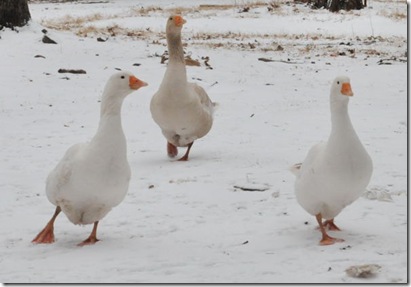 See how happy the geese are, even in the gloomy ice fog?  Winifred, the American Buff, and the two young Embden geese, take a daily stroll around the barnyard first thing every morning and dare one another to sneak by me and jump in the milk cow’s water tub. The young ones haven’t yet mastered the art of stealth, so I catch them in the tub all the time and chase them out of the barn with a broom.  Winifred’s more clever, and she bides her time until I finish chores and am occupied elsewhere.  I hear her, though.  I know the sound of her happy bath honking song.  I also know the sound of the milk cow’s indignant bellow — she is NOT amused by bathing geese. 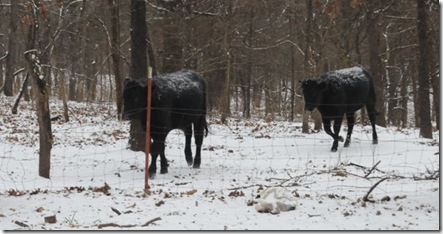 It’s not unusual for the yearling steer and heifer to show up covered in a layer of snow or ice, whatever fell during the night.  The cattle bed down in a low spot in the woods, near some cedar trees that block the wind. 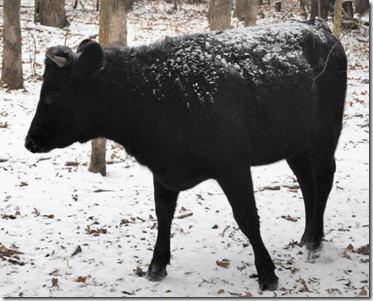 They can be kind of grumpy on mornings like this.  I can’t say I blame them. 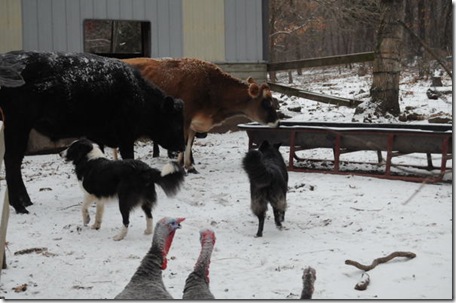 The farmcollies deal with any bad manners.  They clear the cattle from my pathway while I carry in the feed bucket and keep them from crowding around me while I dump feed in the trough.  The dogs keep the peace and enforce my rules, too.  They won’t let the cattle pick on the goats, and they make the birds stay back out of the way where they won’t get trampled by the cattle in the general excitement. 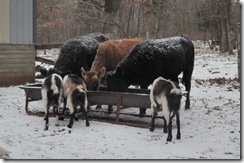 Here’s one of the rules:  cattle on one side of the trough, goats on the other.  If you mix them up, the cattle get greedy and shove the goats out of the way.  One or two of the dogs usually sticks around to make sure this bunch minds their manners until the morning treats are gone.  The others help me move the sheep, check the rabbits, and keep peace among the chickens and ducks, who are prone to bickering. 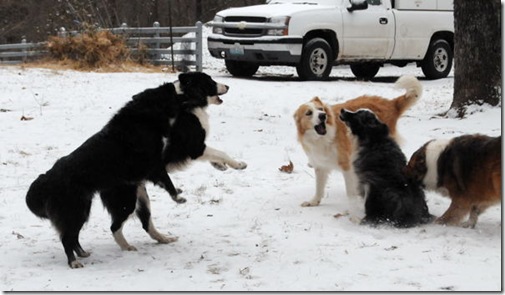 And then, once the chores are finished, it’s wrestling time for doggies!