Today Bebe encountered her first snapping turtle. I spotted this one crossing the grass near the kitchen garden and hurried inside for the camera, hoping the dogs wouldn’t notice it until I returned. No such luck. Blue and Ralphie, both older and turtle-wise, observed from a safe distance while Bebe investigated. She barked. She pounced. She sniffed, and barked some more. She moved in close for a really good look, nose-to-nose and SNAP! That turtle was fast. Bebe was faster. And I, a mere human, with aging reflexes, missed that photo opportunity. My trigger finger was just too slow. 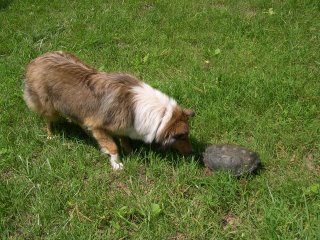