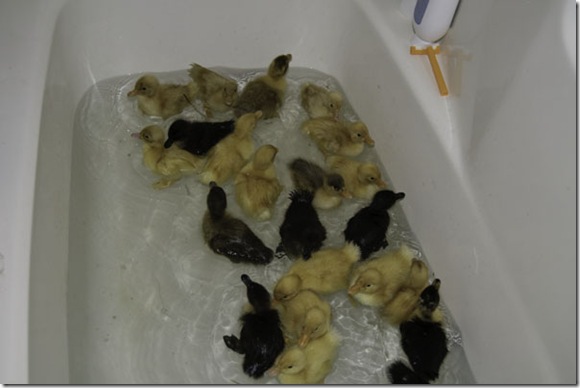 That’s twenty-two ducklings in the bathtub.  Go ahead, count them.

This is their first swim.  Ducklings are hard-wired with swimming skills.  They don’t need to be taught.  As soon as their fluffy bodies land in the water, their webbed feet start paddling.  They swim back and forth, peeping with delight.  They’re the ultimate pool party animals.

The parents of this batch of mixed ducklings come from three different breeds:  Pekin, Golden Cascades, and Cayuga.  Pekins are a meat breed.  Golden Cascades are a top egg breed, and we love duck eggs.  We keep Cayugas just because we like them, and also because they’re a heritage breed of dwindling numbers. Most of these ducklings in the bathtub are crossbred mutts, but I think there’s one purebred Cayuga and a few pure Pekins and Cascades in the bunch.  I won’t be able to tell for sure until they grow their adult feathers.  Later this spring, I’ll separate the best of the adult ducks from our flock into breeding groups to get eggs for hatching purebreds.  I’ll still have to incubate most of them though.  Pekins were developed as a meat breed, and typically they don’t go broody.  I’ve heard the Golden Cascades are better, but we’ve not yet had one successfully hatch out a brood.  I’ve only kept that breed a few years, and some of my best adults are just now maturing enough to be expected to take this nesting thing seriously.  So maybe this year it’ll happen.  I have high hopes for my breeding pair of Cayugas, too, but I’m also going to stick some of their eggs in the incubator for backup.

Based on markings alone, I’d pick this speckled duckling as my favorite.  I love the mottled coloring on its beak.  The black indicates it’s part Cayuga, and the rest is probably Golden Cascade.  I don’t mind the crossbreds.  I like the interesting colors, and thus far our crosses have been good layers. 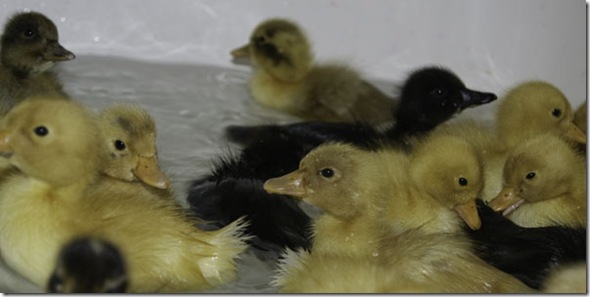 They’re quick, even when they’re tiny.  They quickly learn to maneuver in the water, to ease around one another, to chase, and to nuzzle up close. 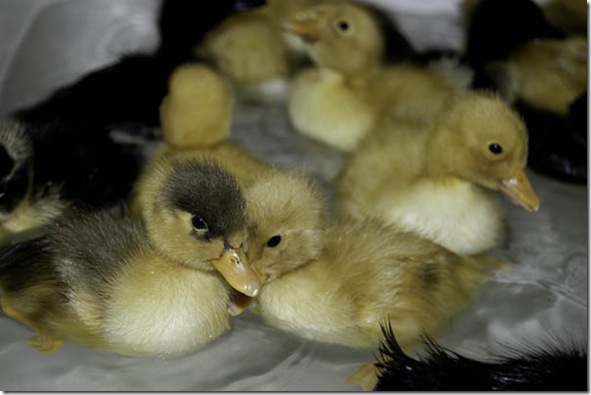 Already, after five minutes, they’re getting waterlogged.  They haven’t started sinking yet, but they’re losing buoyancy.  Time to get out and dry off.  Their first couple of swim sessions are necessarily short.

The ducklings hatched over a 24-hour period starting about midday last Thursday, then spent a couple of days in a small brooder where they recovered from their exertions.  They dried off, learned to stand up and steady their legs.  They learned to drink water from a dish and sampled the game bird crumbles, which is my favorite starter food for chicks, ducklings, and turkey poults.  Ducklings are fairly quiet their first day.  After that, they get busy.  They dabble their beaks in the water and food, run around, poop, and generally make a mess.  Frequent baths help keep them clean.

Fortunately, the ducklings love baths.  They’d play in the water all day if I’d let them.  Ducklings this young can’t stay in deep water too long though.  Their down gets waterlogged quickly, and they’ll stop floating and drown.  As they get older, they’ll learn to preen and groom better.  As ducks groom themselves, they rub oil from the uropygial gland at the base of their tails over their feathers to make them water-repellant.  Even duck down becomes more water repellant thanks to this grooming aid, and within a few days, the ducklings will be able to swim safely for longer periods.