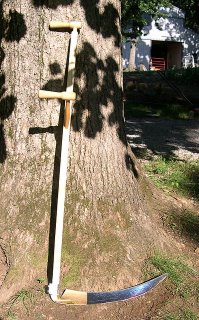 My new favorite tool is a European style scythe from Scythe Supply in Maine. I’ve been interested in various archaic crafts for much of my life, and in the simple tools of farm and home life.

I remember my father using a scythe for trimming tall grass when I was a child, but his was an unwieldy metal tool without grace or character. I asked him about it recently, and he said he hadn’t used it in years. His lower back hurt badly after each use.

I’m told by those who seem to know about such things that American scythes have earned a bad reputation because of mass production. Factories could produce more, faster, and cheaper, and of course they were designed to accommodate the production process and not each individual. And thus were lost the finer points that make a finely crafted tool a pleasure to use.

After much thought and investigation, I chose a European style scythe with a hand-made snath (handle). I followed the guidelines for proper fit and provided my measurements from hip joint to floor and from elbow to the tip of my outstretched middle finger (cubit). When it arrived, I carefully waterproofed the snath with a mixture of linseed oil and turpentine. I clamped on the blade, and took the scythe to the tall stand of grass and blackberries near the larger of my garden patches. Working in short sessions each day, I practiced my stance and swing, and gradually began to make sense of the instructions I’d read in various articles. I cut a respectable area and let the hay dry in the heat. I raked it into windrows, turned the windrows, and finally deemed it finished. I hauled four heaping loads in the old dump cart to the rabbit stall in the barn. The stack filled a corner, six feet tall.

It’s good hay, or at least the rabbits think so. And it makes good use of the best corner of what used to be a pasture and now is the fringe area along my young orchard and the gardens. I could keep that area trimmed with the lawn mower, but the clippings aren’t so nice as this long-fibered hay. And then there’s the noise and the exhaust from the mower engine to consider. There’s a certain peace to be found in the rhythmic motion, the swish of the blade through the grass, and the sounds of the countryside. It’s not a bad trade-off, and there’s always the lawnmower when I’m in the mood to just get the job done in a hurry.

A breath of spring