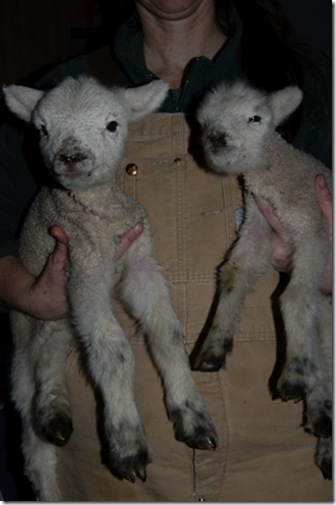 I found these two under a cedar tree at dusk Saturday.  That’s Lamb Chops on the left.  He weighed in at 7 3/4 pounds.  He’s more than double his twin’s weight.  We’re calling the little one on the right Tiny since she’s only 3 3/4 pounds.  I missed their birth by minutes, but got to help with the cleanup.  (If you don’t already know the details, you don’t want them.  Trust me!)  The twins needed extra cleanup since their mother chose to give birth on a bed of fallen cedar needles, oak leaves, and dirt.  Some of that dirt bonded with the lanolin in their wool, so they look pretty messy in these photos.   I look pretty messy in my insulated overalls, too, don’t you think? 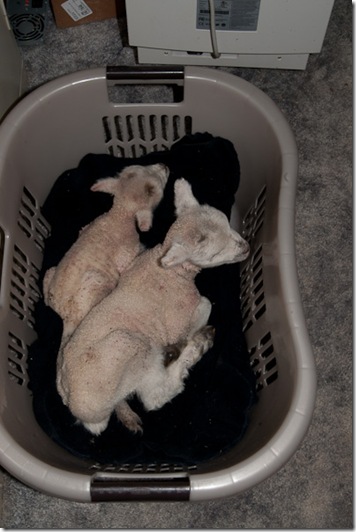 I left both lambs locked safely in the barn with their dam overnight after making sure both were mostly dry and had nursed enough to get a bit of colostrum in their stomachs.  (Colostrum is the thicker, antibody-rich first milk that’s essential for newborns.) It was a tough call, deciding to leave the little one out in the barn instead of bringing her into the warm house.  She looked so small and frail, and I feared she wouldn’t be strong enough.  Her dam was very attentive, though, and had a full udder.  I hoped Tiny would nurse more and fill up on that all-important colostrum.  Besides, the lambs looked so cute snuggled up together, trying to sleep, while their mama kept licking them awake and the other ewes stood in a protective circle around them.

By morning, Tiny was shivering and hunched, and her mama was only paying attention to the bigger, sturdier twin.  So Tiny moved into the house with us where it’s warm all the time and milk comes from a bottle.  She lived in a clothes basket for the first 5 hours or so, and we worried that we’d lose her.  She couldn’t drink more than a few swallows at a time.  By mid-afternoon, she’d perked up some and tried to climb out of the basket. 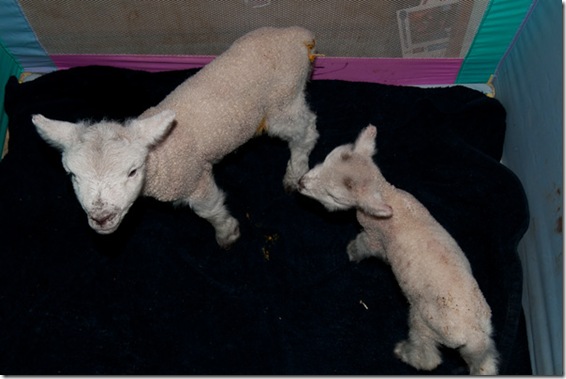 Tiny is my first bottle lamb.  I’ve plenty of experience with bottle feeding goat kids, though, and thus far, it’s not much different caring for a lamb.  They drink, they sleep, they poop and play.   Lambchops visited her once while she was still in the basket.  Now he joins her for play dates in the old playpen we keep around for these situations.  Hopefully she’ll be strong enough soon for play dates outdoors.  She needs to spend as much time as possible around the other sheep so she learns how to act like a sheep and not, say, a cat or dog. 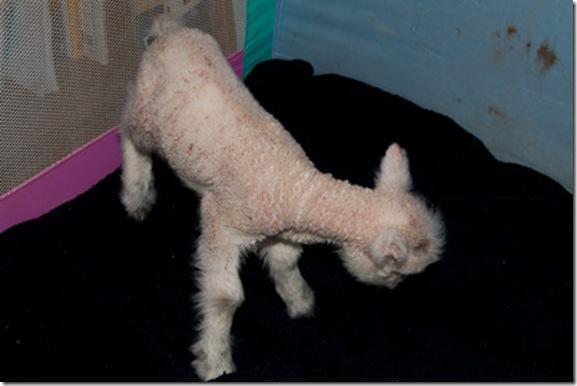 At not quite 24 hours, she wore out pretty quickly.    It was enough for her to stand up for a while, follow her brother back and forth across the playpen a few times.  Then her head started to sag, and her knees weakened. 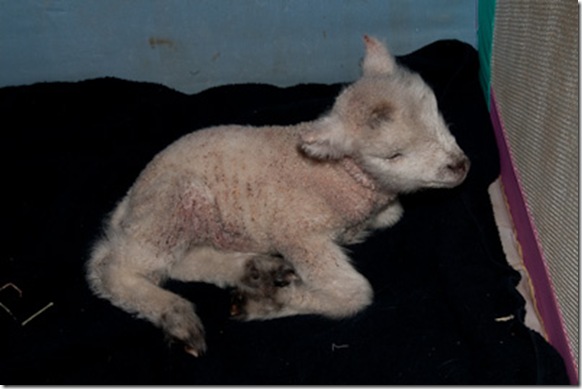 Time for a nap. 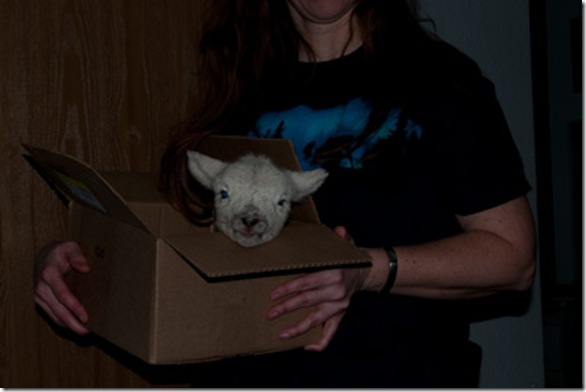 While Tiny slept, I packed Lambchops into a box for his first weight check on the package scale in the office. 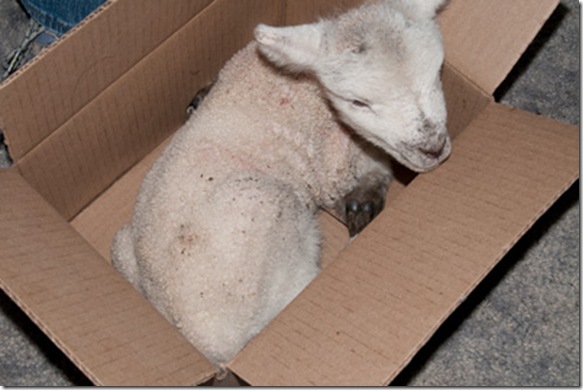 And I considered giving him a bath.  Briefly.  Not a good idea, though, since I needed to get him back to his mama before she reached full-blown hysteria.   Daisy, the ewe, adores her little guy.  She’ll tolerate Tiny, but she doesn’t greet her with relief or joy when I carry her to the barn, and she doesn’t care when Tiny leaves.  Yesterday, she pushed Tiny away, not roughly, but the rejection was clear.

She’s found a substitute mom in one of the farmcollies.  More about that tomorrow . . .