Rosie, our Jersey cow, isn’t pulling her weight.  Sure, that premature calving was a setback, and a gal needs time to recover her health after that sort of trauma.  Rosie’s always been a good mama cow, and she provides Cocoa with all the milk she can manage.  It’s not enough though— not for Cocoa, who’s still sucking down her morning bottle of milk replacer.  And I certainly have expectations that aren’t being met.   I want to drink fresh milk, too.  I want milk for cheesemaking, and cream for my coffee, and freshly churned butter for my morning toast.

So I’ve been looking around, seeing what’s available.  A few days ago I had a chance to visit a dairy farm a few hours north where they have various Guernseys and Guernsey cross cows  for sale.  There was a lot more snow left on the ground there than at home, and the mud was deeper, too.   I’d come prepared, though, with muck boots and a warm coat.  So the farmer and I headed out for the grand tour, despite the fog and falling mist.  I met cows of all ages, gentle and personable, some ready to calve soon and some too young to be bred yet. 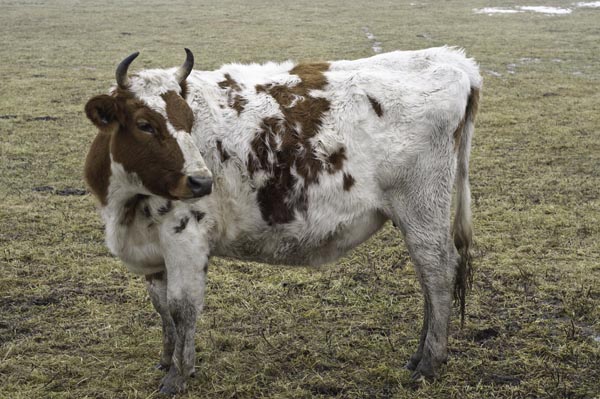 This sweet young heifer followed us across the pasture.  She had such beautiful eyes and a gentle manner.    I wanted to take her home, right then. 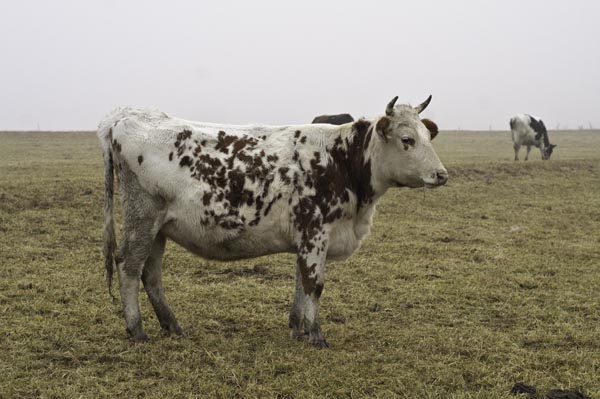 This one seemed just as gentle and friendly, and I swear, she winked at me. 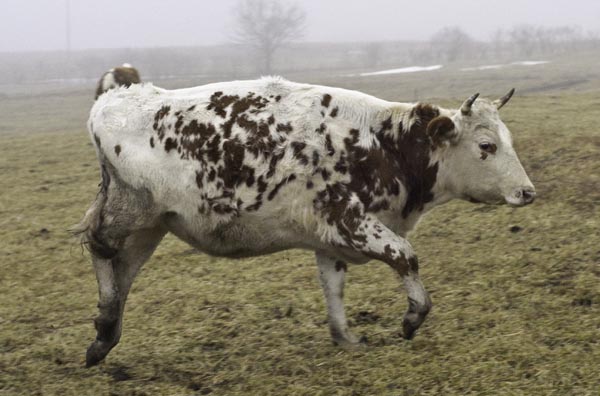 She’s young enough to enjoy a playful romp, yet mannerly enough to romp well away from me.  I like that in a cow. 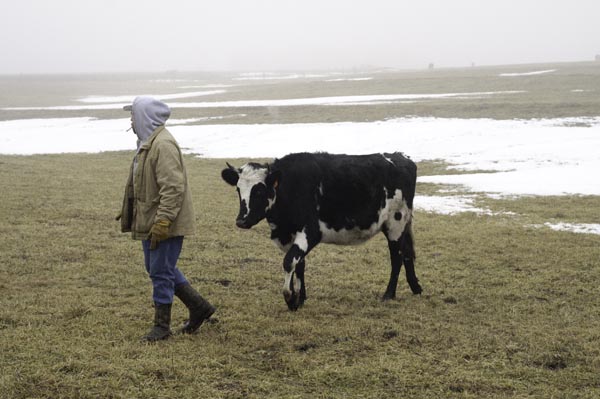 This pretty heifer was a bit more mischievous.  She kept sneaking up on the farmer, bumping him for attention.  She got a bit pushy. I didn’t want to take her home. 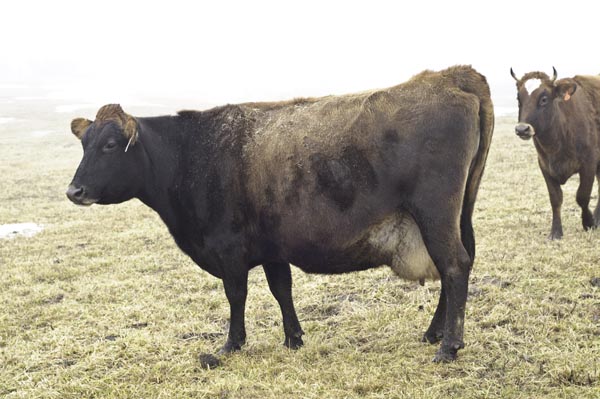 The more mature cows paid little attention to such shenanigans.   They grazed.  They stared at us.  They grazed some more.   I liked the looks of this one — nice udder, nice teats that looked about the right size for comfortable hand-milking.   She stood perfectly still, patient and placid, while I took my time examing her from all angles. 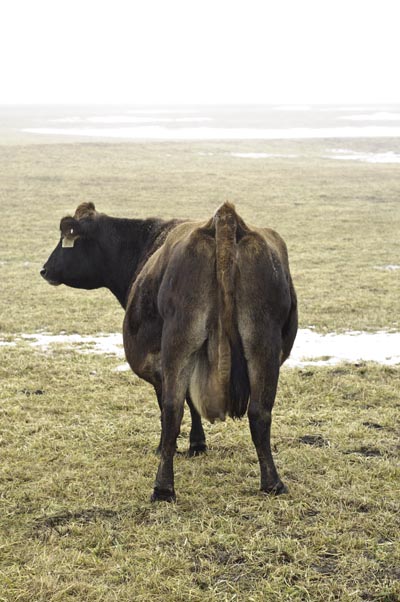 Being an experienced dairy cow, she knew I’d want a good look at the back end, too, so she posed for me. 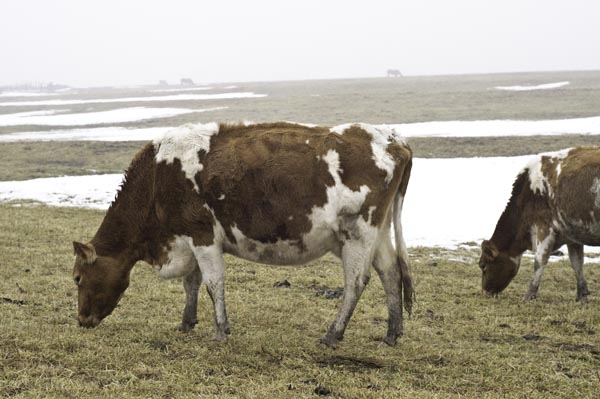 This Guernsey, however, was my favorite.  We caught up with her out in the pasture, and she closed her eyes in bliss when the farmer scratched her forehead.  She stood patiently while we discussed her attributes and thoroughly checked out her udder. 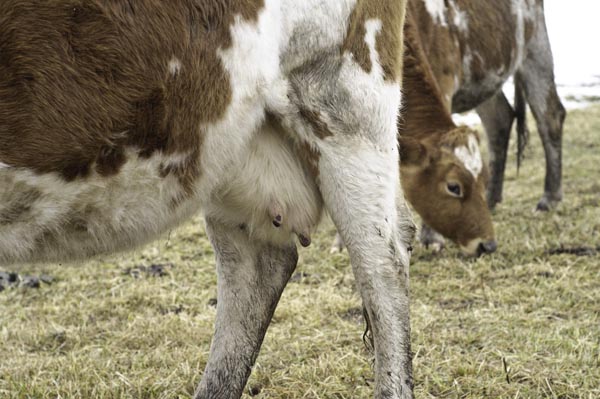 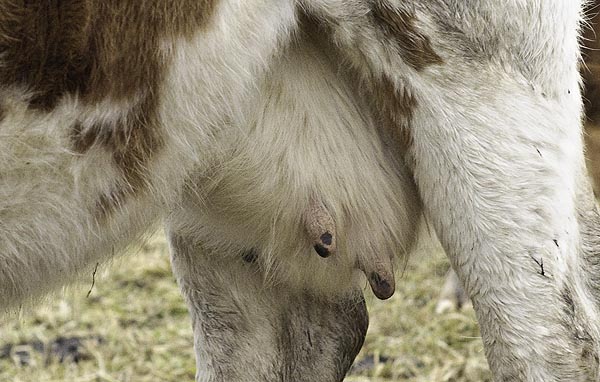 I moved in close and checked for myself.  The cow stood patiently, without being tied or even held by the farmer’s hands, while I, a stranger, felt her udder and measured her teats.  I decided then and there that she was my kind of cow.  I’m not saying I’m going to buy her and make her MY cow.   Nothing’s been decided yet.   I’m just saying she’s a well-mannered dairy cow.

While I was checking out the lovely Guernsey udder, the farmer was keeping that pushy black & white heifer occupied.  And a few others, ever curious, crept closer.   I finished with my extensive examination of the Guernsey’s udder, leaned back on my heels and glanced around. 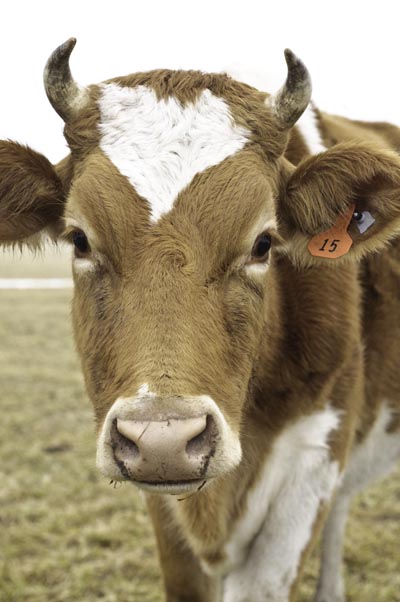 And found this at my shoulder.   She wasn’t pushy, just curious.  She sniffed and huffed a little, but did nothing to make me feel the least bit intimidated, even though I was crouched at nose level.

Her breath was not as pretty as her eyes.

I wanted to take her home anyway.