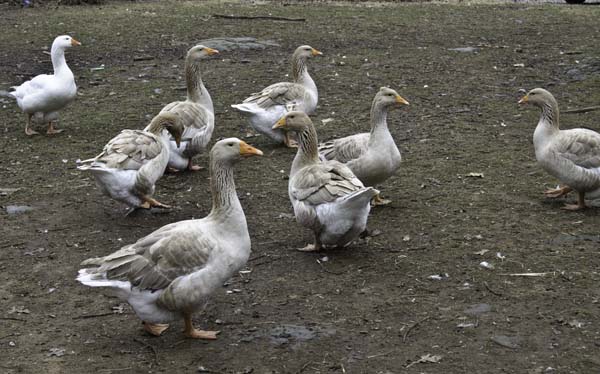 Geese are, by far, the most entertaining of the barnyard birds.  We’ve two kinds, a small flock of American Buffs and one lone white Embden that was destined for the table but hasn’t yet met her fate.  The Buffs are the gentlest geese I’ve ever known.  They’ve completely changed my opinion of geese.   Those I knew in my youth were aggressive and mean, great big birds to be observed from the safety of distance and good fences. 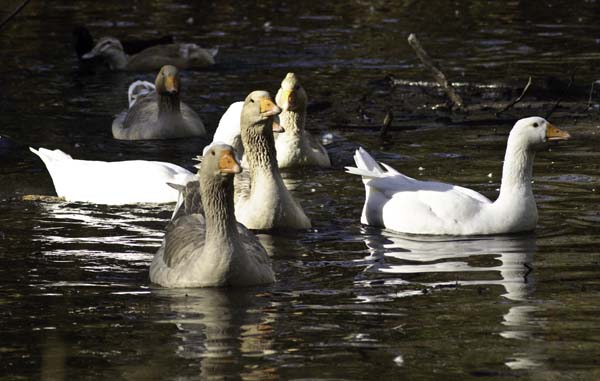 My Buffs, however, are gentle by nature.  Some are  shy, and some are more friendly and like a bit of human attention.   The Embdens we’ve had here at the farm are gentler than the geese of my youth, but they’re not so kind to the lesser birds of the barnyard.  They’ve been particularly hard on a few ducks, which may or may not have deserved their treatment.  (Ducks will be ducks, and they’re mischievous little brats.) 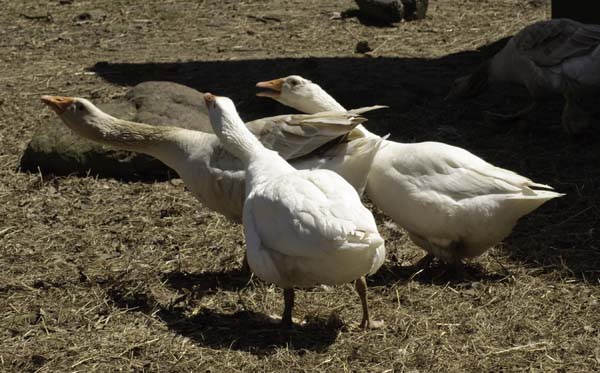 Geese commonly pair up with a mate or divide into cliques within the flock.  They’ll defend any of their flock, but they defend their close friends more vigorously.   My buffs have been good parents to the many ducklings they’ve adopted and raised.  They were good parents, too, for the few weeks last year’s hatching of goslings survived.   We lost them all, plus our mature male gander in an incident at the creek.  I wasn’t here, so I don’t know the details.  The evidence suggested the gander might have challenged the bull over right-of-way at the creek crossing.  Whatever happened, it didn’t end well. 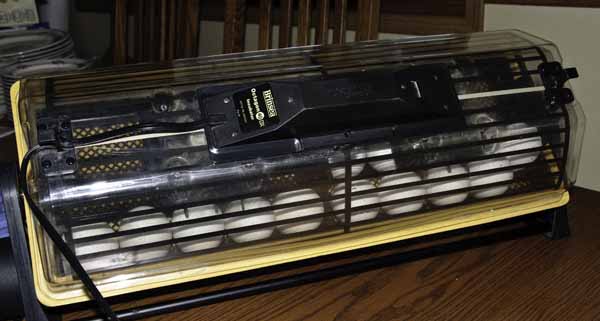 The geese are laying eggs again, but they’ve not begun to nest in earnest.  And so we’ve been gathering the eggs, morning and night, and sometimes in between when we locate yet another secret nesting spot.  The nights still are too cold to leave the eggs unattended in unwarmed nests.  They freeze, then crack and leak.  Those eggs stand no chance of hatching.   So we tuck our gathered eggs into the incubator and hope for the best. 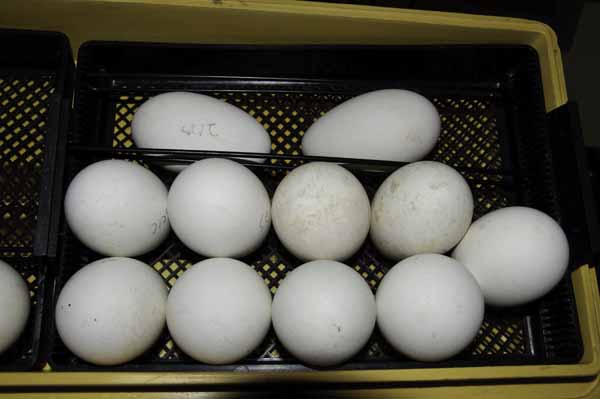 With 21 goose eggs in the incubator now, the chances are good.  That’s assuming we have a fertile gander in the flock.  I don’t know that we do.  After the gander and goslings were killed, we acquired sexed goslings from two different flocks. We knew two were males.  One died young in a barnyard accident.  The other lost his leg band.   Predators snatched two of the flock of young ones later in the summer, and we don’t know the gender of the victims.   I’ve tried a couple of times to sex the remaining young geese.  I know how, theoretically, but knowing how and doing it are two different things when big panicked birds are involved.   My last attempt earned me a hard whack in the jaw from a goose wing and my face hurt for a week.

(Can you blame them for panicking?  We grab them, turn them over, demand to view their privates . . . it’s no surprise they object.) 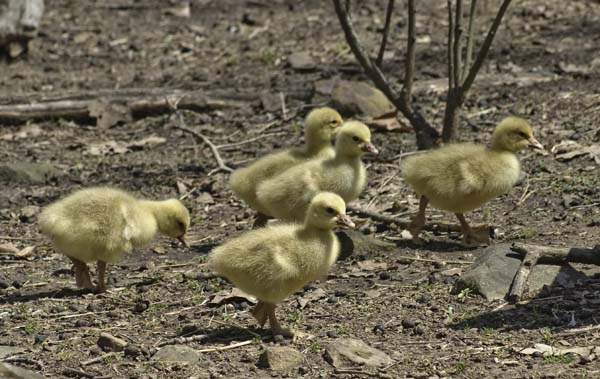 I won’t have to wait the full 30-day incubation period to know what the chances are we’ll have goslings.  In a few more days, I’ll candle the first of the eggs to go into the incubator.  Hopefully I’ll find signs of fertile eggs developing.