The recipe for Mom’s White Bread makes three loaves.  I’m not a big fan of plain white bread, so when I took the pictures for Basic Bread – Part One &  Basic Bread – Part Two, I decided to dress up two of the loaves and turn them into Cinnamon Bread.

Any plain bread recipe can be turned into Cinnamon Bread.    Make the dough, according to whatever recipe you choose.  When it’s time to shape the dough into loaves to put into the loaf pans to rise, set aside however many balls of dough you need.

For each cinnamon loaf, melt 2 tablespoons of butter, then set aside to cool.  In a separate bowl, mix 1/3 cup sugar and 1 tablespoon cinnamon for each loaf.  Set that aside, too, while you shape the loaves. 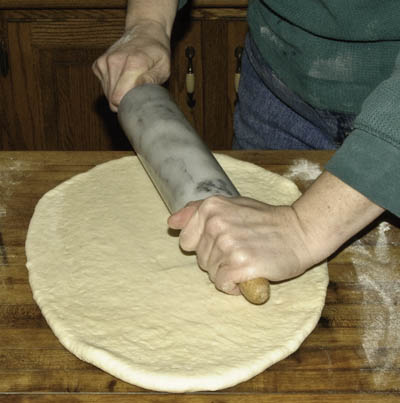 Roll out the dough so that one side is about as long as your loaf pans and the other is twice that length. 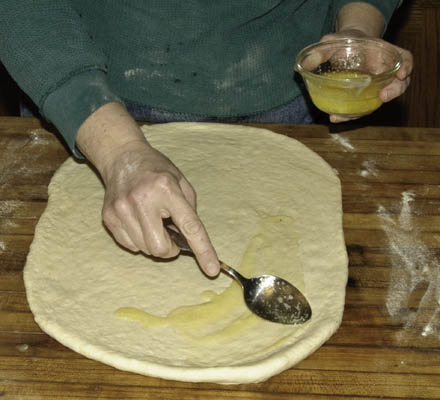 Spread melted (cooled) butter over the surface, leaving the outer half inch untouched.  The butter helps hold the cinnamon sugar in place when you roll up the loaf, plus it adds so much good flavor. 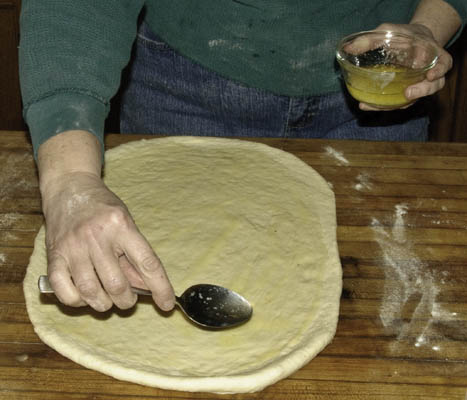 I always worry that I’m not using enough.  This, actually, is more than enough.  It’s too much for this purpose — not a crisis because really, can you ever have too much butter? 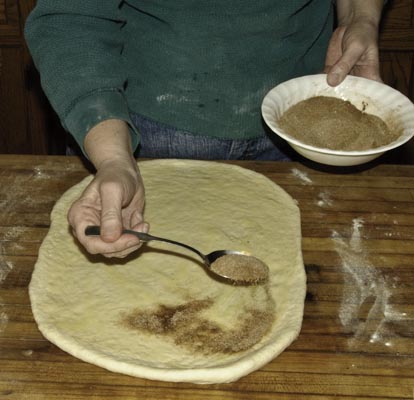 Sprinkle the cinnamon sugar generously over the butter.  Again, keep it off the outer half inch. 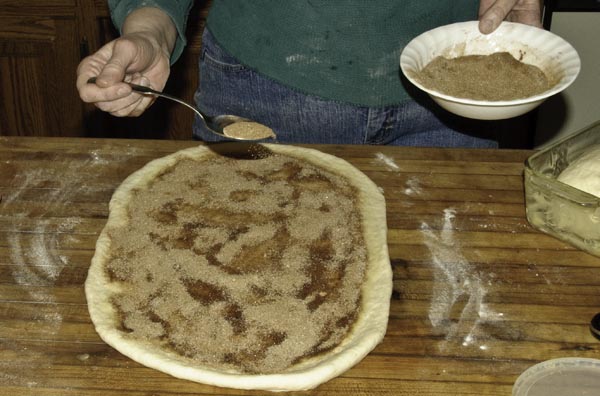 This actually is more cinnamon sugar than I like.  It’s less than the Genius Husband likes.  Compromise is good. 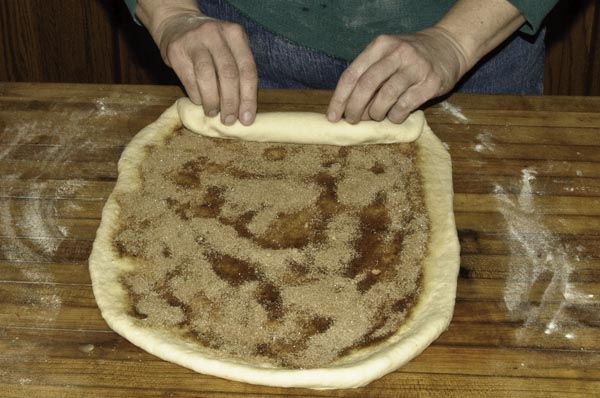 Roll the dough into a loaf. 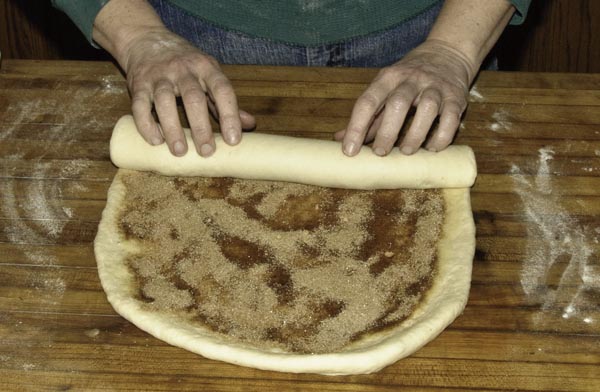 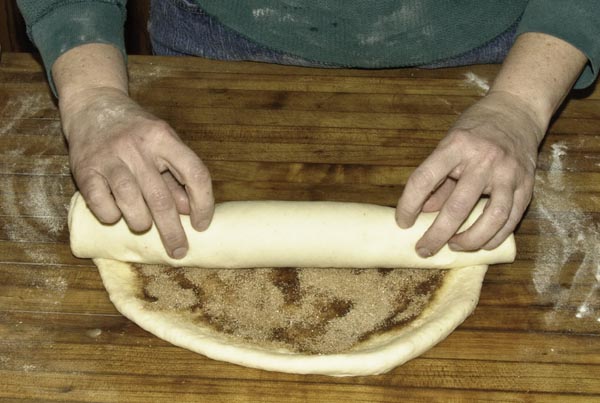 The last few inches are the trickiest.  When you get to the end, roll the loaf gently over, holding the edge carefully in place. 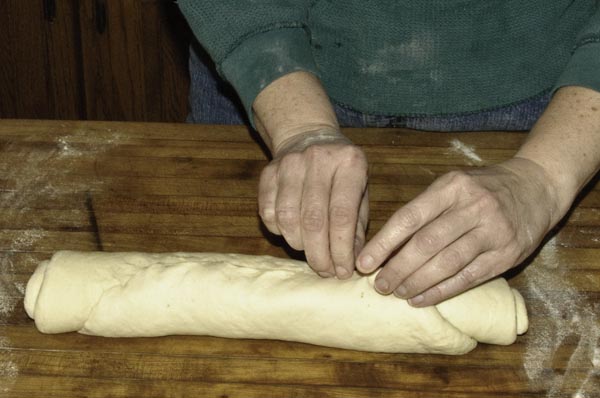 Pinch the dough together at the rolled edge.  It doesn’t all have to stick together tightly, but the pinches help keep the roll together until everything’s tucked into the loaf pan. 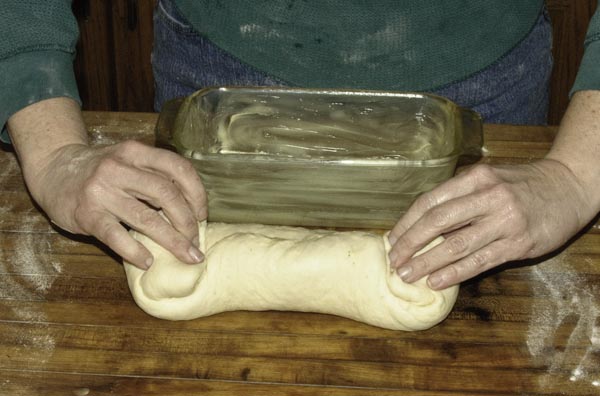 Turn the loaf ends under. 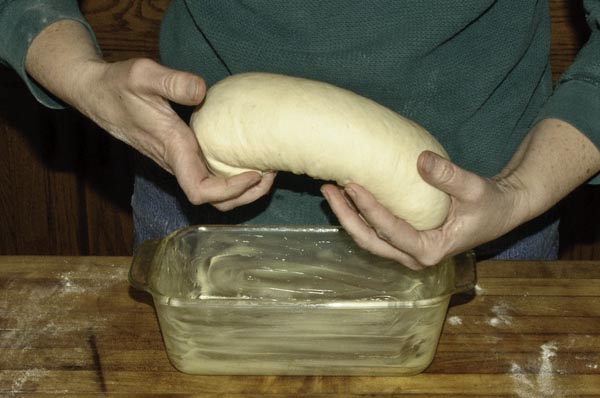 Turn over and carefully place in loaf pan. 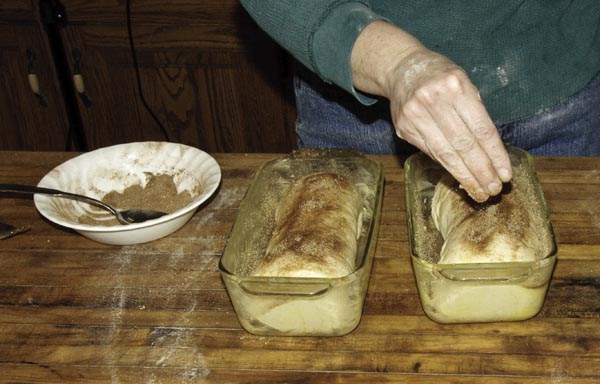 Brush the tops of the loaves with butter.  You can sprinkle cinnamon sugar on now, but you’ll get a prettier loaf if you wait until the loaf is readier to put in the oven.  I do it at this stage when I have regular and cinnamon loaves so there’s no chance of confusion about which is which.

Set the loaves aside and let rise until double, usually about an hour. 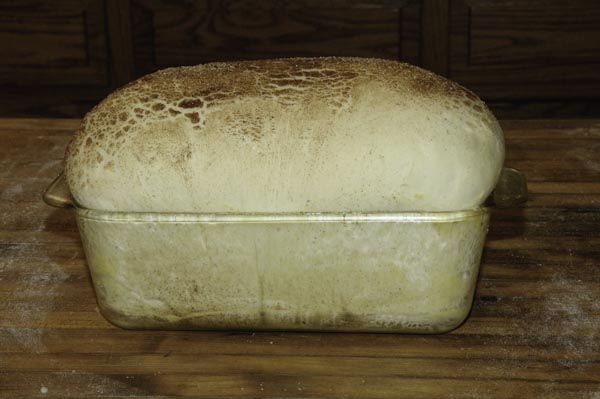 Note the crackled effect of the cinnamon sugar on top — this is a result of timing.  Apply the cinnamon-sugar early and it won’t spread evenly as the bread rises.  It’s just a visual thing. 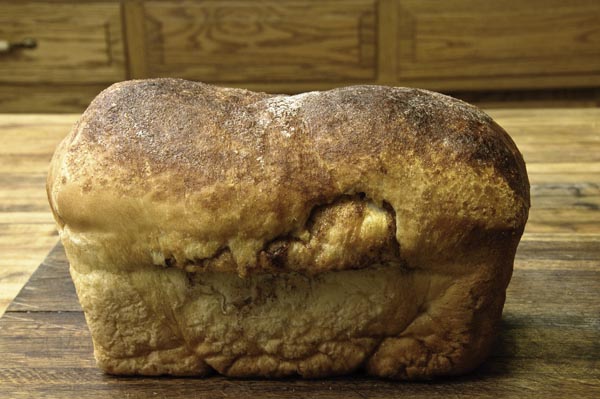 And here’s one of the finished loaves.  Doesn’t that cinnamon sugar oozing out the edge look yummy?  It should have been at the bottom but I apparently didn’t get this loaf positioned in the pan properly. 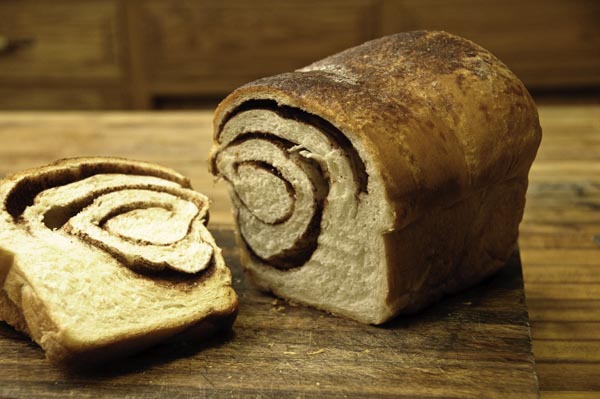 And so the inside looks like this — lopsided.  See the gaps in the cinnamon sugar spiral?   That’s because I used too much butter and I let the loaf rise  too much.  Both factors contributed  to that situation.   So the loaves aren’t perfect but that’s fine.  Homemade bread doesn’t have to look like it belongs in a magazine.  It just needs to taste good.