This morning as I settled into position for the morning milking, I heard new voices complaining in the stall across the barn aisle. Hmm. Interesting. My sleep brain hadn’t yet grasped the significance when a scuffle began. The disturbance upset the cow, and that’s sufficient cause for me to set the milk bucket aside and deal most harshly with the culprits. Usually.

This morning there was good reason for the disruption. When multiple species live together, such as they do in our barn and pastures, the dynamics can become interesting. Relationships are formed, and there are cultural clashes as one group’s instincts class with another’s. Such was the case in the barn today. Tinkerbell, the ewe, stood in the corner with the firstborn twin, who was frustrated with his wobbly legs and complaining vigorously. Nearby, Katrinka, our goat herd queen, stood guard over the second twin lamb. Katrinka hasn’t had kids in se 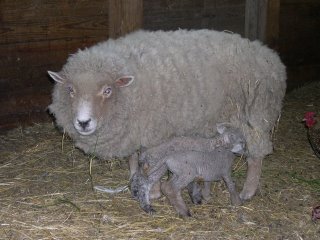 veral years, but each new birth in our mixed herd revives her mothering instincts. She’s become the herd midwife, so to speak. She’s present for the birth, helps clean up the babies, and helps deal with the afterbirth. She might even murmur encouragement throughout the long labor for all I know. Or those soft baas might be something less complimentary. Who knows? She’s also a formidable protector, much to the dismay of the three farmcollies, who’d really like to lick the babies and stand guard over them, too. And the rest of the small herd? They hovered close, creating a ‘safe zone’ that no dog shall pass.

Most mothers know, however, that there comes a point when the well-meaning assistance and hovering become too much. So I shooed the rest of the herd into the pasture and shut the barn door. The dogs were ordered away as well, and I returned to my morning chores. Later in the day, when the usual newborn tasks had been attended to and the twins’ bellies were full, I weighed them. Much to my surprise, their combined weight was 10 pounds. I expected less because neither looks as big as a half-grown kitten. Babydoll Southdown lambs are tiny when born, with ears that look too big for their gangly, fuzzy bodies. Their soft wool is usually coated with lanolin, so they look messy for the first week or so. These two have a bit of dirt rubbed into the lanolin as well since their mother chose to give birth in the dust near the pasture door instead of the deep straw further inside.