Tom’s been feeling pretty perky now that he’s recovered from the injuries incurred during that unfortunate incident with the geese. Strutting around the barnyard with half his feathers missing couldn’t have been much fun. Now that he’s fully feathered again, he struts and preens all day. He also exhibits an annoying curiosity about the camera. 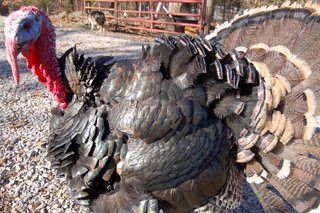 A few months ago, this guy was bottom turkey in the pecking order. We weren’t even sure he was a tom. He didn’t act like one, and he hadn’t developed enough of a snood and wattle to distinguish him from the hens. As time passed, and the more dominant toms disappeared, one by one, our flock dwindled to this guy and one hen. Likely, it was his very meekness that saved him from the coyotes and bobcat that preyed on his braver flockmates. He didn’t browse in the woods, and he usually was first to alight on a high roost near day’s end . And thus he’s survived predation thus far. With the more dominant Tom’s gone, his hormones kicked in, and that long red drip over his beak, his snood, began to lengthen. The red wattles at his throat grew and deepened in color. I’ve seen this happen many times before when a dominant tom leaves the flock for whatever reason. One or two of the lesser toms will step up to take his place, and in turkeys, the signs include the physical developments as well as the behavior changes.