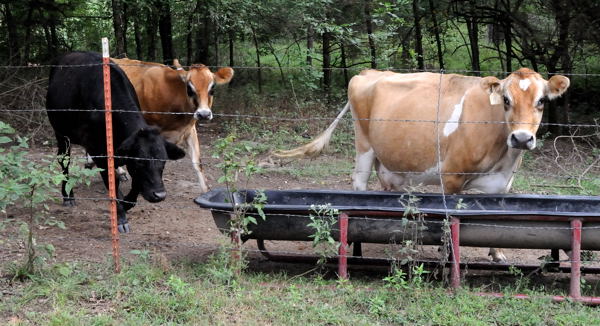 It’s morning.  It’s time to eat.  They’ve been waiting for hours.  HOURS!  They don’t get much, just a can of sweet feed to share between the four of them.  There’s plenty of grass for them out in the pasture.  I feed them that bit of grain to keep them tame and cooperative, always willing to follow me if I’m carrying that magic shiny can full of grain.  Or a bucket.  Or if I’m just walking through the pasture because you never know, I might have a bucket of oats, sweetened with molasses, tucked under my jacket or in my hat.

Above:  that’s Lottie, my older Jersey milk cow, waiting at the feeder.  She has attitude and a big sense of entitlement.  If I’m late, she’ll shove the feed bunk, bang on it, and maybe turn it over.  Steak is the black steer approaching from the left.  He’s Lottie’s calf from last fall, and he’s good at helping turn the feed bunk over.  Rosie is the pretty Jersey between them.  Her specialty is a loud, demanding bellow.

Freckles is on the job though.  No cattle mischief allowed!  He slips under the barbed wire and hurries to move them back.  That black and white blotch at the right end of the feed bunk is Freckles, racing in to enforce the rules. 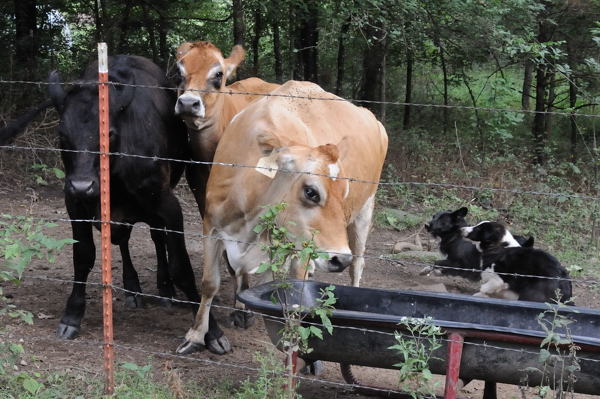 Mama Dinah, the black dog, is right there helping.  Or maybe Freckles is helping her.  Dinah had this duty first, and she taught freckles how to move the cattle back a bit and hold them in a little group under the trees where they coudln’t vent their frustrations on the feed bunk or water trough.  (Yeah, they turn that over, too.  If it’s too full to tip, they just give it a few kicks.) 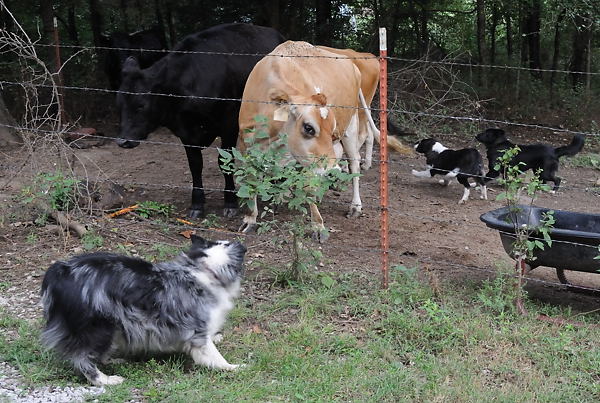 Blue, the old Aussie, helps from his side of the fence, urging the cattle back.  He doesn’t see very well anymore, so we’d rather he wasn’t in the middle of the action.  He tends to push the stock in the wrong direction now because he can’t see that it’s the wrong direction.

So, time passed.  The cattle behaved and stood quietly under the trees while I took care of the other livestock.  The dogs left the pasture to help me round up some adventurous young ducks who escaped when I let the older ones out for their usual morning excursion to the pond. 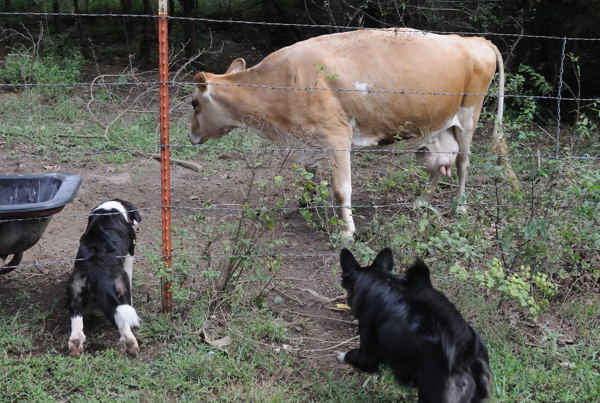 Lottie took advantage and returned to thumping the feed bunk.  The dogs moved her back while I sprinkled their morning rations down the length of the feed bunk — finally.

And there was peace at the feeder.  And happy munching sounds.  And cow slobber. 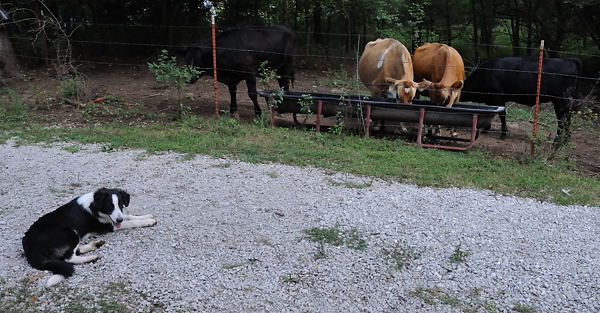 Just in case, Freckles settled in to keep an eye on them.