She’d head one off, get its attention, give it a quick moo warning.  And the other would zip away in a different direction.

The sheep apparently don’t see well, and I suspect they have short term memory problems, too.  They spotted the commotion up the hill and trotted up to see what was happening.  The entire freak-out over their first sighting of the calves was forgotten. 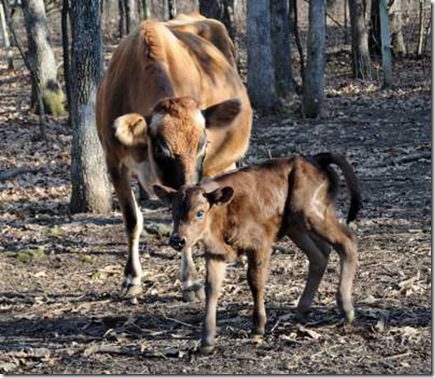 She’d just settled Chuck down when he turned his head and saw the sheep.  He just had to hurry over and introduce himself.

The sheep spotted Chuck running toward them with Mama Rosie in pursuit.  They spun around and headed for the trees, but the little heifer calf was already zipping past them through the woods.  Eeek!  What to do?  Which way to go?  The heifer’s in the deep shadows in the photo above.  If you look above the head of the second sheep from the left, you might be able to make out the heifer’s head, then her body and that raised tail.  I love watching those tails curve up and curl around when the calves get playful. 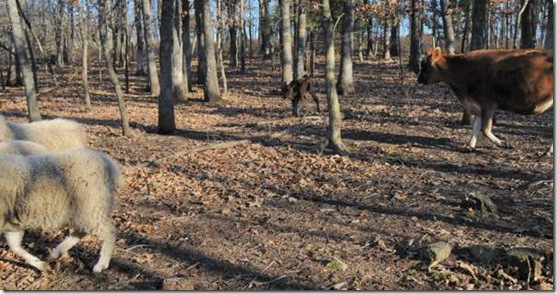 To tell the truth, if I were a sheep, I’d probably run away too.  My Jerseys can be very protective of their calves.  I’m careful around the mamas myself, even Rosie, who I first hugged as a damp newborn.  She’s a gentle cow, but I learned long ago to be cautious around mother animals and their young.   My parents trained me well on that point, and I have a couple of scars as reminders of the times I goofed.  But I digress . . . .

Rosie was pretty flustered at this point.  Chuck didn’t seem to care.  He just had to run.

The heifer circled back around, zipping through strips of sunshine and shadow, jumping over logs and stumps, dodging big rocks, testing her gangly legs and her balance.

The two calves joined up, and for a moment it appeared they might settle down and give their poor mama a break. 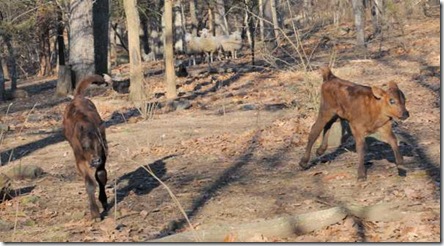 The little heifer, who’s a bit quieter and calmer, slowed down first.  Chuck still had plenty of energy left. 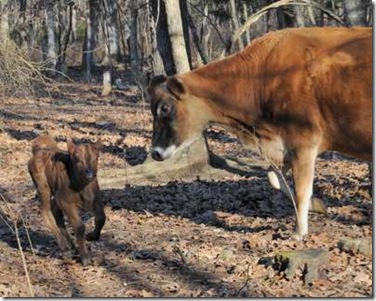