This isn’t your mother’s apple pie.  This probably isn’t like any apple pie you’ve ever had.  It’s big and flat and so delectibly flavorful you’ll never want plain old apple pie again.  Probably.  And it’s definitely not low calorie.

Turn the oven on to 425 degrees to preheat while you prepare the pie. 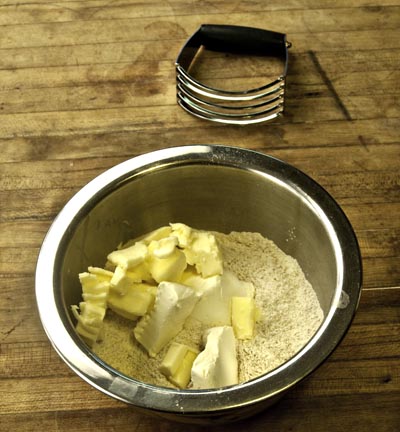 Start with two cups flour.  I like to use whole wheat pastry flour, but regular all-purpose flour will do.  Stir 3/4 teaspoon salt into the flour, then add 10 tablespoons cold butter and 1/2 cup very cold cream cheese. 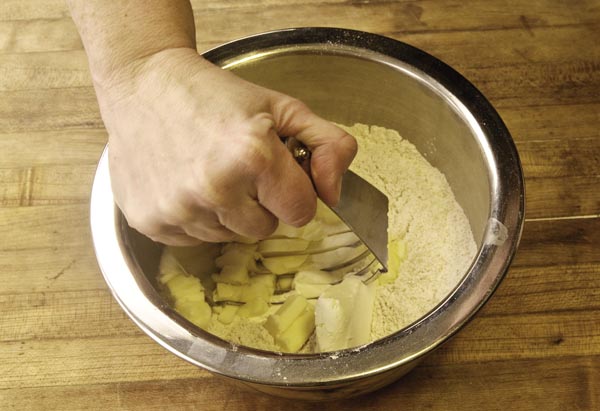 Use a pastry cutter to cut the butter and cream cheese into the flour.  Work it until the texture resembles small crumbs. 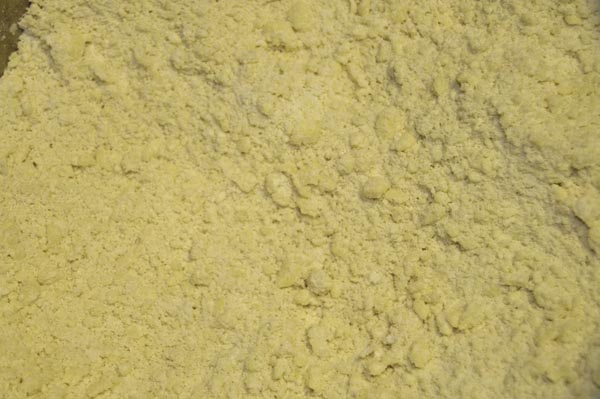 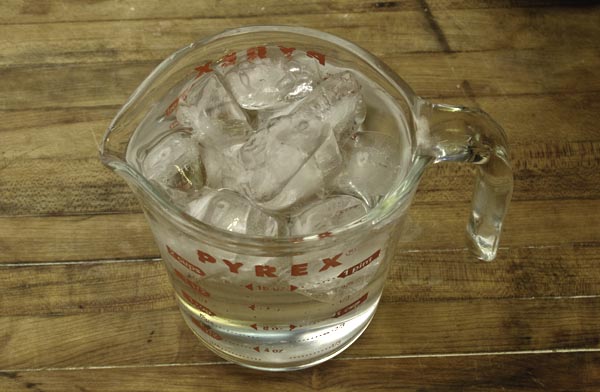 Measure out 4 tablespoons ice water . . . use the water, not the ice.  You probably knew that, but I’m just making sure.  Sprinkle it over the crumbs and stir until the mixture clumbs together. 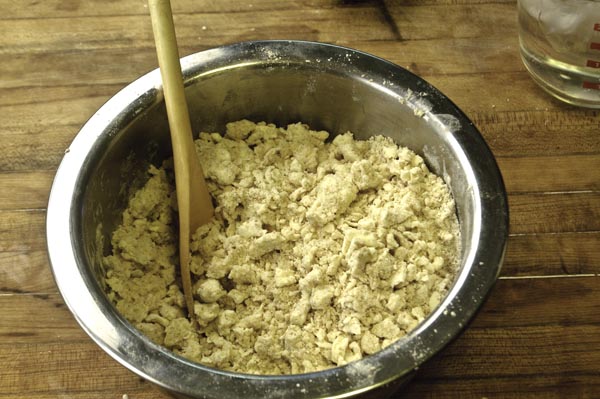 Sometimes 4 tablespoons isn’t enough.  If necessary, you can add another tablespoon or so of water.  Be cautious.  Too much water will make the dough sticky, and the crust will be tough instead of flaky. 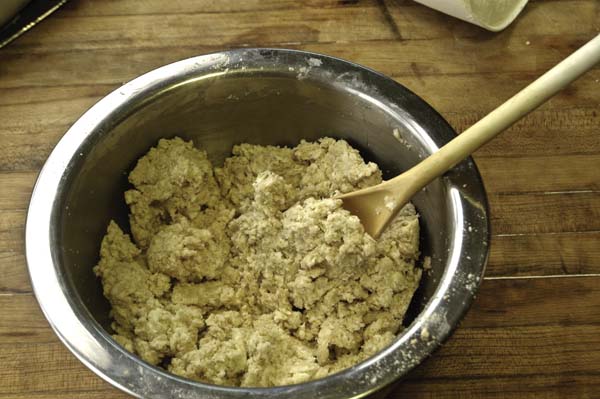 This looks about right. 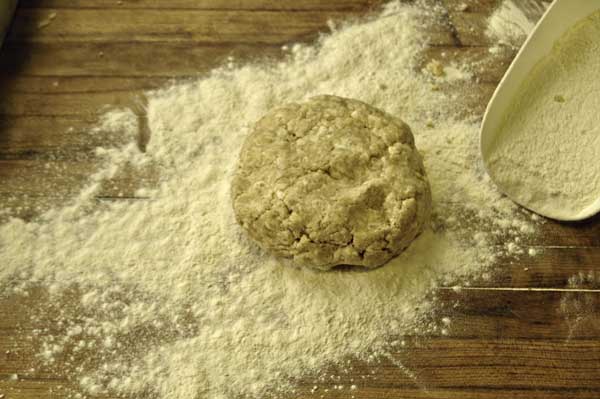 Shape the dough into two balls.  Turn the first ball of dough onto a lightly floured surface and flatten slightly.  Handle the dough as little as possible with your hands.   If the dough warms too much, the crust will be tough instead of flaky. 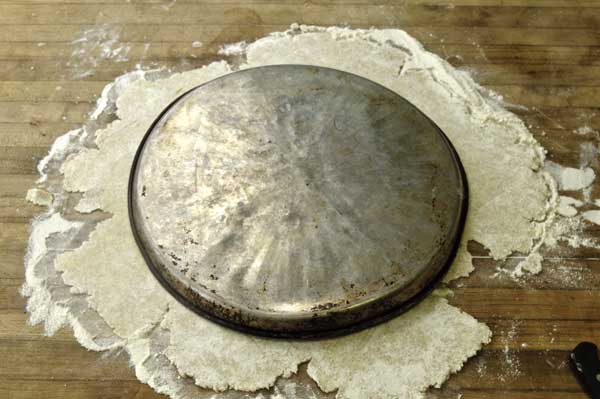 Roll out the dough, keeping the surface well floured so the dough doesn’t stick.  It needs to be about a little larger than your pan.  It doesn’t have to be perfect.  This dough tends toward ragged edges.   I use an old 14-inch pizza pan for this recipe.   Put the dough in the pan and trim the edges.  Roll out the second ball of dough, a little larger than the first, and have it ready. 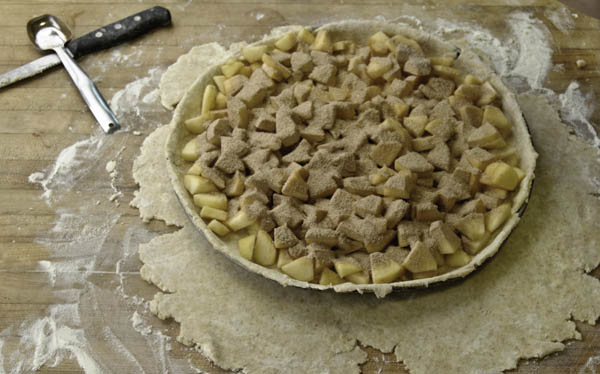 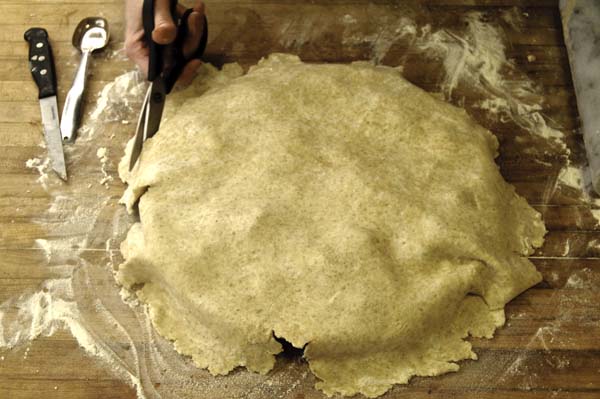 Add the top crust.  Trim the edge with a knife or kitchen shears, cutting about a half inch from the edge of the pan. 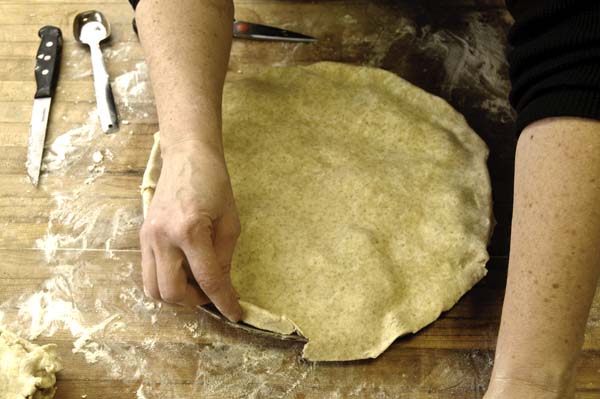 Tuck the overlapping edge around the bottom crust and into the pan. 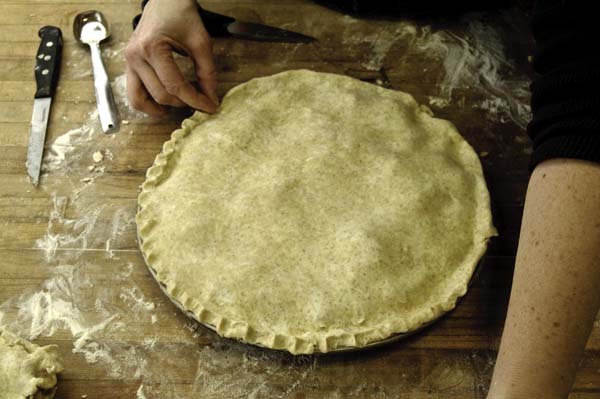 Pinch the edge, all the way around, to seal the crust and keep the juices from overflowing at the edges.  Cut slits in the top to allow the steam to escape. 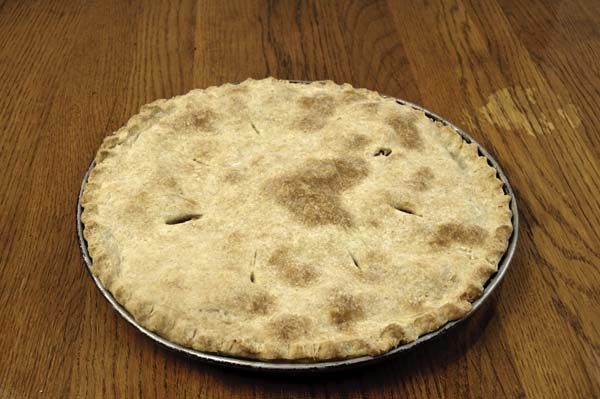 Remove from the oven and let cool for about an hour. 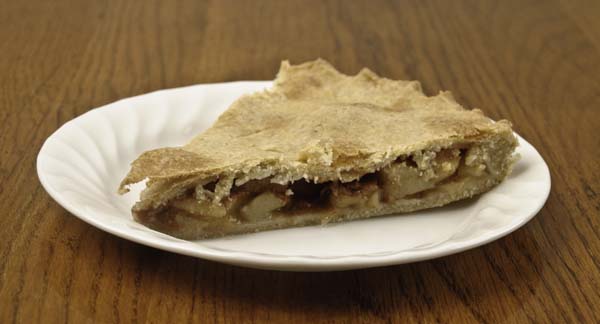 Cut and eat.  The Genius Husband likes his with a scoop of vanilla ice cream.  I prefer mine plain.  It’s rich and sweet enough for me as it is.  I usually slice off a piece and walk off with it, nibbling as I work.    With a higher crust to filling ratio than usual, the pieces hold together well. 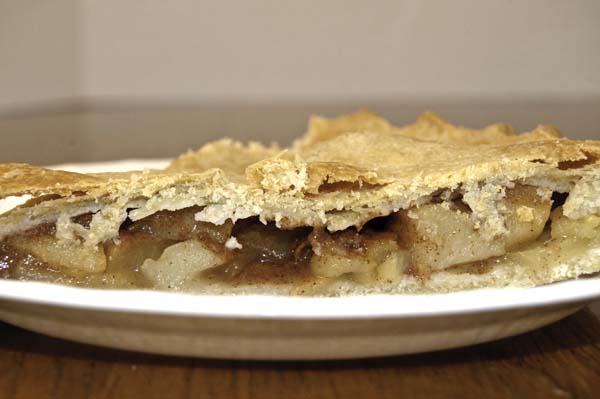 See how flaky the crust is?  I can’t decide whether the crust or that cinnamon apple filling is better.