Remember what I said a few days ago?  That I brought a bovine into the bathroom?

It’s true.  Today I’ve included the proof in photos for those who can’t believe any sane woman would bring farm animals into the house.

Hmm, let me rephrase that.  Today I’ve included the proof in photos that I brought a farm animal into the house.   (Something I think makes perfect sense, but others might disagree.)  And while I’m confessing, I should also admit that at times I’ve also kept lambs, goat kids, rabbits, and various injured or newly hatched poultry inside where they’re safe, warm, and easily tended.  In fact, this particular bathroom is nicknamed ‘the hospital room.’  It’s roomy, with plenty of space for cages, chick brooders, an incubator, and there’s a handheld sprayer in the shower that’s handy for bathing skunk-sprayed dogs.  Every farm should have a hospital room like this. 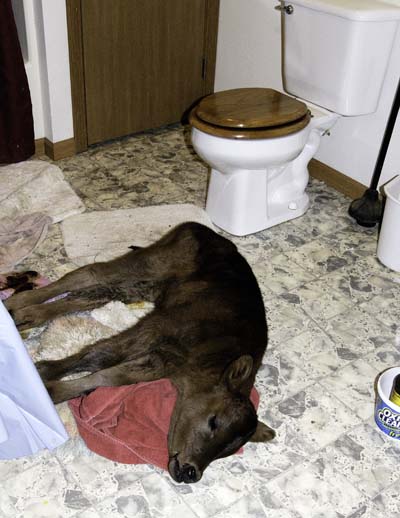 Here’s little Cocoa not long after we brought her inside on the day of her birth.   At the time of the photo, she wasn’t quite dry and was still hypothermic.  Her shivering had eased, though.

Cocoa was born on a cold morning, between the steep banks of a narrow stream.  No doubt when the cow picked the spot, she just noted that the creek banks blocked the bitter wind.  The thick bed of leaves over the frozen trickle of a stream must have seemed like a good landing spot.  But as the frosty morning air warmed, the seeps began to flow.  By the time we found the cow and her new calf, the leaves were soaked and so was the calf. 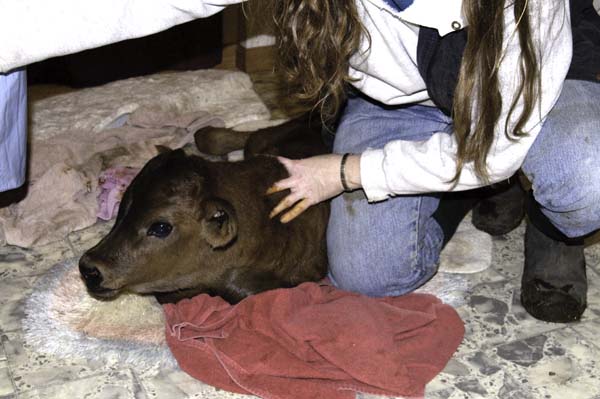 In time, Cocoa warmed enough that the shivering stopped.  Her eyes brightened with alertness, and she held her head up instead of letting it loll this way and that. 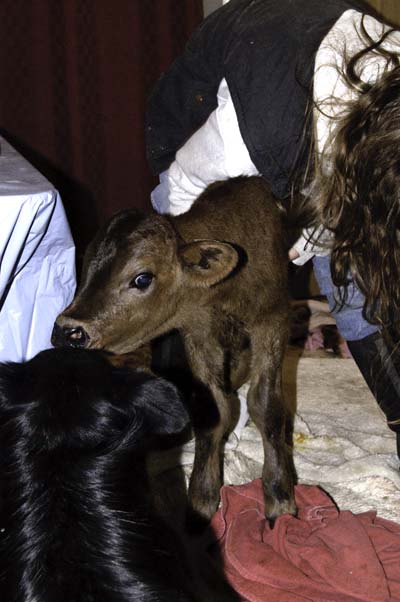 Dinah, the black farmcollie, supervised our efforts and was particularly helpful in cleaning up the calf’s face.  She also excelled at moving in front of the camera when the Genius Husband tried to take a photo of me wrestling the calf to her feet.  The calf was willing, but that slippery vinyl flooring made it tough for both of us.  We managed though. 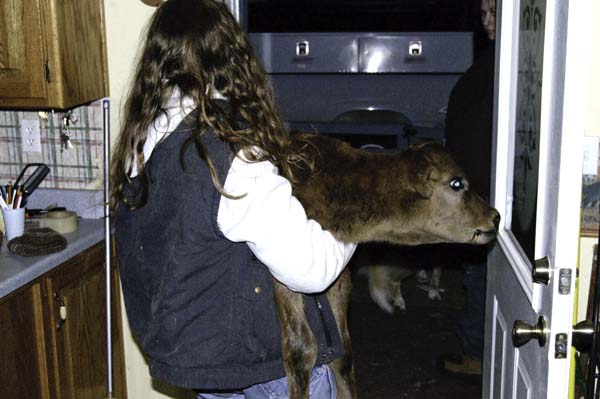 Having established that the calf was capable of standing on its own and taking a few steps, we hauled the calf out to the barn to rejoin her mama. 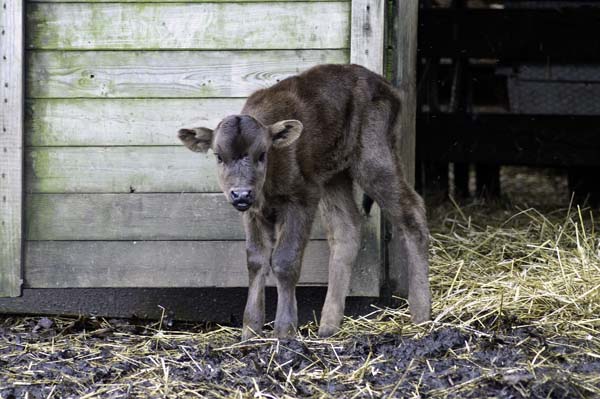 And now, some twelve days later, Cocoa’s still out at the barn, but a lot more steady on her feet.  And she’s not too thrilled about that deep mud pit that developed just outside the stall door, thanks to today’s thunderstorms.