The Day of the Dead 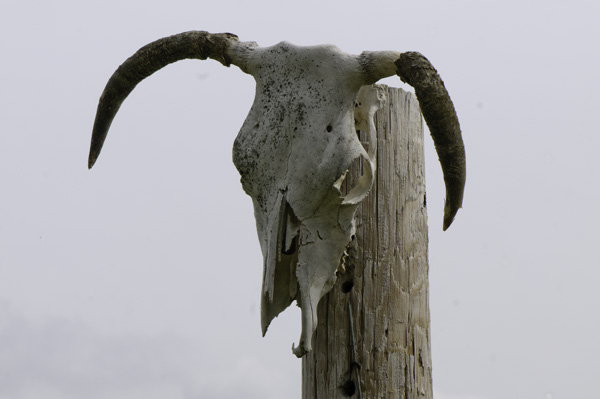 A few years ago, my son spent some time in Brazil.  Two years, actually, and I hated that . . . having my firstborn clear off in another hemisphere, thousands of miles away from me and completely independent and not needing me at all  . . . but I digress.   Since then, I’ve been more aware of some of the other holidays that fall near Halloween.  Much of Latin America celebrates The Day of the Dead, and so does Brazil.  The general point, as I understand it, is remembering and honoring one’s ancestors.   Some cultures celebrate more quietly, and others have a bit more fun, party a bit, hang skeleton decor.  My daughter spotted some of those last year in the office of a university professor who spent a lot of time in Mexico and Latin America.

With or without the skeletons, the concept appeals to me.   I remember my grandparents with great fondness and love, and I was lucky enough to know three of my great grandmothers, too.  One of those great grandmothers built a farm with her husband from raw land deep in the Missouri Ozarks when she was a newlywed, and after he died, she raised their  children there. 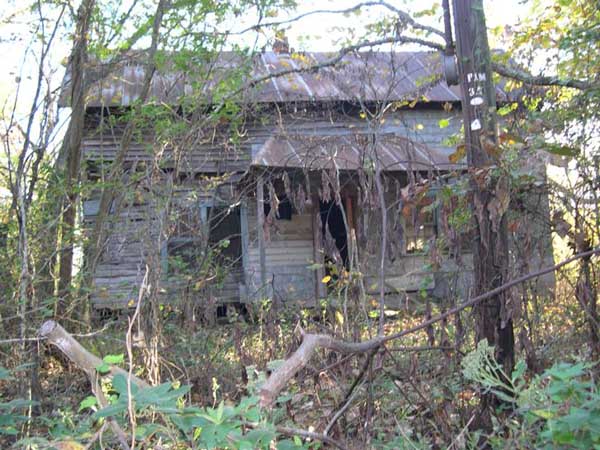 Their house still stands, though it and the rest of the property is neglected and unused now.   The county long ago abandoned the road that once bordered the north side of the yard.   My youngest daughter and I visited there a few  years ago on a long road trip we took for the primary purpose of her gaining a lot more real-world driving experience before taking the exam for her driver’s license.  The old farm place seemed a fitting destination for that coming-of-age experience, and I bored her for days with stories of my childhood adventures with my cousins there.  Hot summer days picking blackberries.  Fishing from the riverbank.  Exploring the fields and woods.  Sitting beneath the big oak tree at the corner of the yard, listening to Great-grandma Flora’s stories of her girlhood journey from Texas in a covered wagon.

Back then, the house seemed a lot bigger.  The windows were intact, the yard well-tended, and something wonderful always seemed to be simmering in the kitchen.  I remember long summer weekends there, the house crowded with relatives.  I remember chasing kittens, watching for snakes on the path to the outhouse, sleeping on a pallet in a crowded back bedroom, bathing on the back porch under a makeshift shower an uncle rigged with a garden hose.  We rode our bikes for miles around the area with the older cousins watching out for the younger ones.   My grandfather was born in that house and grew up working hard on the land.  He didn’t stay, though his brother did.  The brother married, raised children there, and finally, moved away too in search of an easier living. 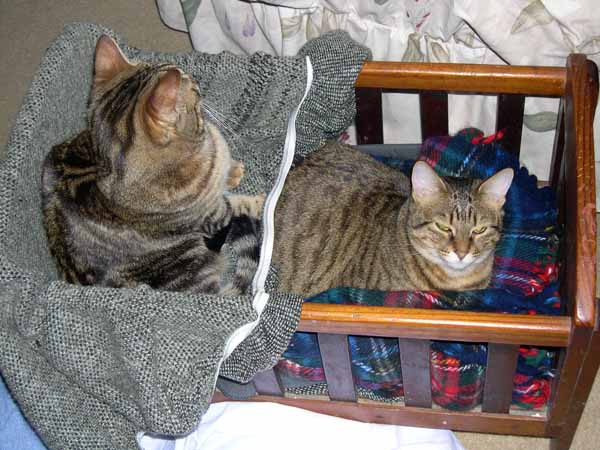 Those early hardscrabble years on the farm shaped my grandfather into a resourceful craftsman.  He was a machinist by trade, but he tinkered with wood in his spare time.  He built this dollbed from scrap wood  for his daughter, my mother, when she was a small child.  It survived her childhood, my own, and my children’s, too.  My younger daughter’s cats claimed it for a while, and then reluctantly allowed my mother to reclaim it and move it back to her home.  I expect it’ll still be around for another generation or two. 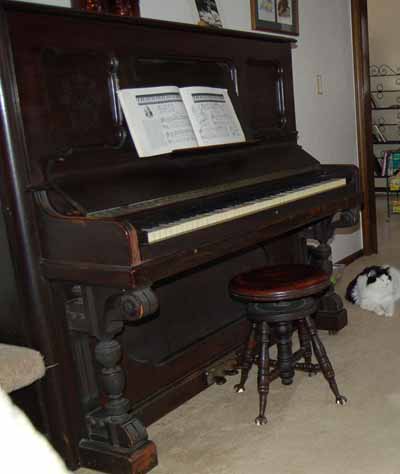 My children grew up with pieces of family lore from their father’s side of the family, too.  This piano has been in his family since the late 1890s.  We had it tuned, and the children all took lessons for a while.  I toyed for a few years with the notion of refinishing it, but found I liked the beaded varnish and the little bumps and scrapes around the base too much.  I liked that it looked old, well-loved, and well-used.   The piano stool is a special favorite of mine.  It’s not original to the piano.  I don’t know what it matched originally.   My grandmother kept it at her dressing table for years, and she’d scold us kids for spinning and spinning on it until the seat wound to its tallest point and wobbled.  She always caught us, too, no matter how sneaky we tried to be.  And then she’d make us go outside and play in the sunshine.  And years later, I followed in her footsteps, scolded my own children for spinning on the stool, and sent them outside. 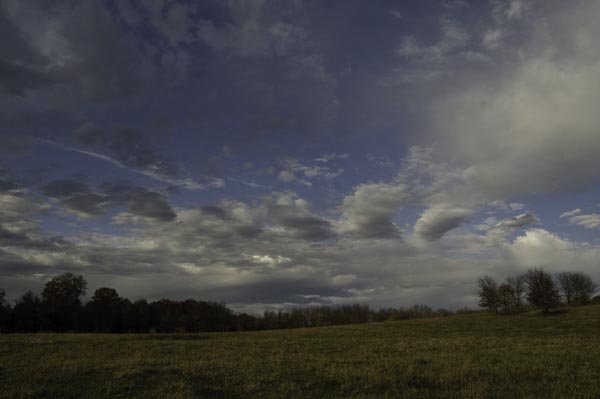 If it was a day like this — a day like today — we could find lots to do.  In fact, wandering around outside in the dappled sunshine seemed like an ideal way for my younger daughter and I to celebrate The Day of the Dead here at the farm.  We could reminisce and honor our ancestors quite well outside, and we’d get a bit of work done as well. 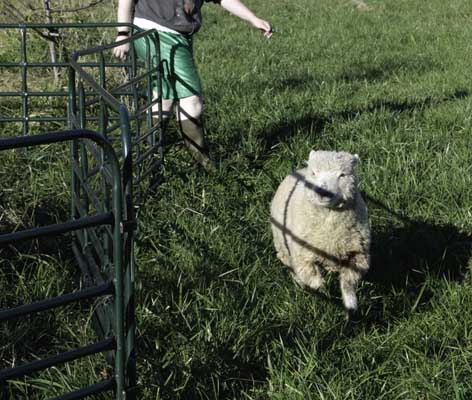 We fed the livestock and chased wayward young sheep back into the pen. 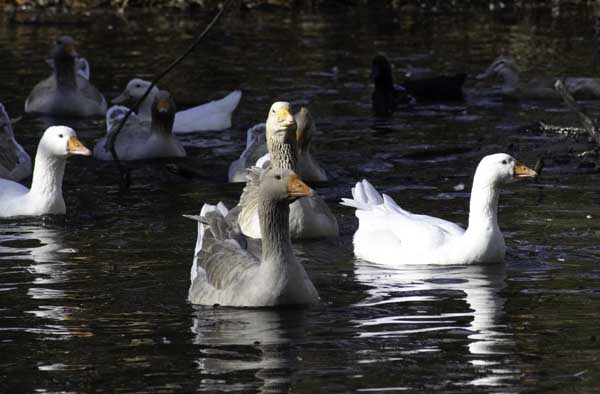 We slipped through the woods to the pond so we could spy on the geese.  Then we went for a long walk and picked what few wild persimmons we could reach.  Those are in the freezer now with the ones I gathered after the first frost. 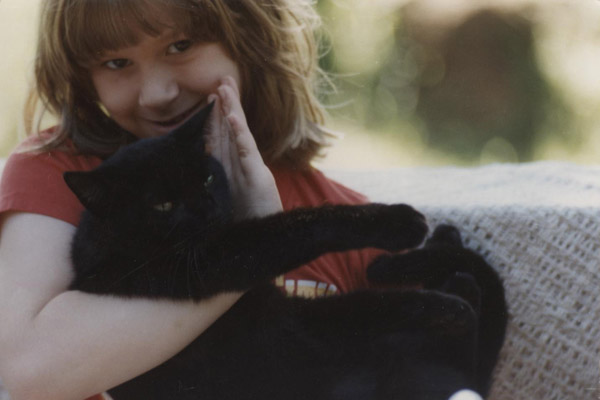 About that daughter . . . she’s twenty-something now and has just moved back to the farm to help me with all the many things I used to do a lot more easily on my own than I can manage now.   Though I’d appreciate her company and her assistance anyway, I’m especially grateful now, given the string of moderate but annoying injuries that side-tracked me this year.  She’ll be contributing to the blog, too, so keep checking back.  She’s promised to post her brownie recipe.  Trust me on this.  She makes the world’s best dark chocolate brownies, plus they’re low-fat, lower sugar, and healthier than any brownie you’ve ever eaten.