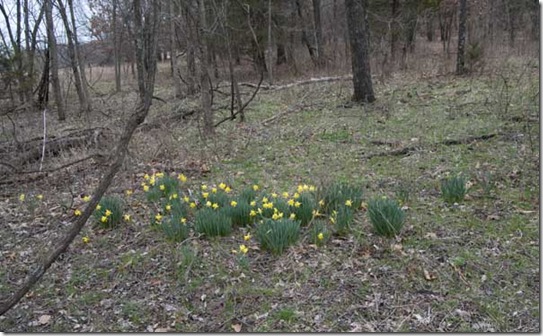 Tucked into the edge of the woods on our farm is the neglected, overgrown remains of an old farmhouse.  There’s not a lot left of it, some foundation stones, rusting roof tin, bricks strewn here and there — and some hardy survivors in what probably were well-tended flower beds in the yard. 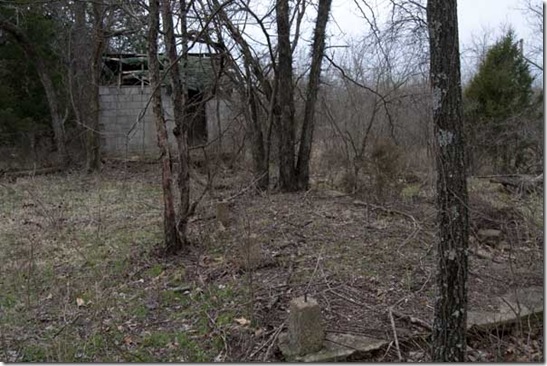 I suspect this crumbling concrete pedestal supported a porch.  The small concrete block building that’s still standing was rebuilt at some point and appears not to have been attached to the house.  It has a poured concrete floor and walls that are obviously from a much later period than the steps leading down to the native stone cellar beneath it.  There’s a good chance we’ll be able to restore this little blockhouse, which will make a handy storage shed.  I’ve even entertained thoughts of using the root cellar beneath it, assuming we can fix the drainage problem so it doesn’t fill with water after every rain shower.

Until there’s time and money for that project, I’ll concentrate just on saving the flowers.  They probably don’t need my help.  They’ve survived decades here in the ever deepening shade of the trees and wild grapevines that are taking over the site.  The daffodils still bloom in clumps, their blossoms smaller than the flashy commercial types sold in garden centers today.  Next are the fragrant paperwhites, then the iris and yuccas.  There’s wisteria, too, but the vine has climbed high into the trees and blooms up there where the flowers aren’t easy to admire.  Flowers serve a biological purpose, of course, and thus aren’t wasted when humans aren’t around to admire them.  It’s human, though, to think so.  We’re ego-centric beings.

I swipe blossoms when I can for vases in my kitchen and office.  My second summer here I transplanted yellow and lavender irises from the old farmhouse site to my own yard.   Previous owners of this house have done the same.  I’m sure of it.  The lilac bush by my front porch was, I think, moved from the lilacs by the corner of the block house, and the irises growing above our septic tank match the ones growing in the woods.  I’ve hesitated to disturb more daffodils, though, because these still flourish and those at the house don’t seem as happy in the spots they’ve been planted. 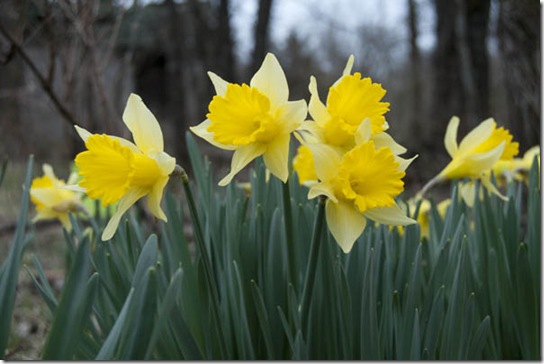 I love admiring the blooms out here in their environment, and I’ll often pick a few for a vase in the house, too.  On a recent day, I decided to pick a lot.  The weather report predicted a hard freeze and maybe snow, which wouldn’t hurt the plants but could be hard on the flowers that had opened.

Tiny soon noticed what I was doing and had to trot over to investigate. 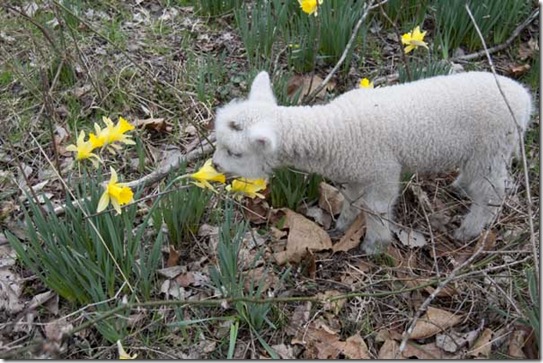 Tasting is just part of the investigation.  She nibbles everything.  Most of the time she spits it out, but she did seem to like the daffodils.  That was a problem.  I used to have an old goat that ate every spring flower she could get to, and the worst she ever got was a tummy ache from overindulgence.  A bottle-fed lamb’s tummy is a bit more sensitive, though, and I didn’t want to take the risk.  So I flicked her on the nose a couple of times until she got the message and backed away.  For a minute.

Just look at that face.  She’s thinking about it, just waiting for me to turn my back so she can steal a flowery snack.  She’s like a child.  Somebody has to watch her every minute she’s out of the pen.